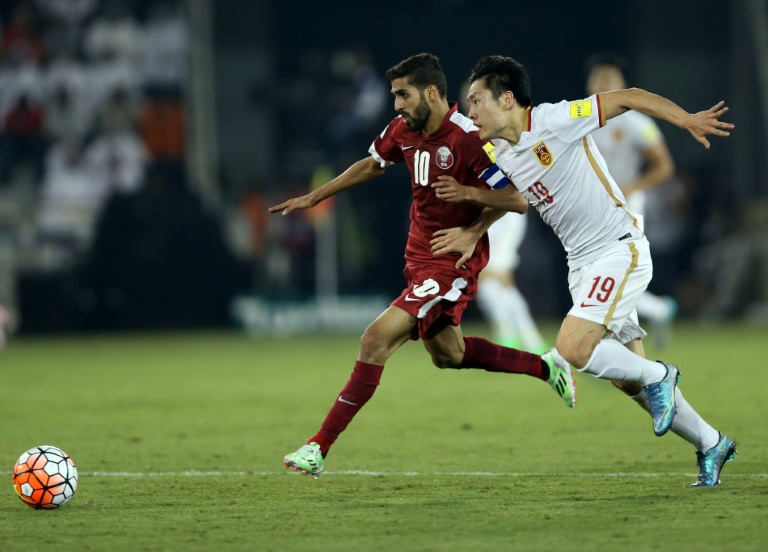 Qatar’s 2018 World Cup ambitions received a boost on Thursday when they defeated AFC Group C rivals China 1-0 in a tense encounter in Doha.

The win, secured by Karim Boudiaf’s 22nd minute header, maintained Qatar’s 100 per cent record and secured their position at the top of the group with four games played.

It also puts them five points ahead of China with just four games left to play.

Only the winners of the group automatically progress to the next stage of qualification, where 12 teams will compete for four spots in Russia in three years’ time.

China’s only hope now looks to be by qualifying as one of the four best runners-up from the current group stage.

Their breakthrough came when Boudiaf rose first to a free kick from skipper Al Haydos to glance the ball home.

Qatar were comfortable at this stage and it took China until the 29th minute to produce their first effort on goal.

Gradually, though, China exerted a little more pressure and came close in the 44th minute when a diving header from Yu Dubao forced a fine save from Qatar’s Claude Amin.

That set the tone for much of the second half with China increasingly pushing for an equaliser and Qatar looking ever more anxious to close the game out.

China, cheered on by a large number of fans in the 7,730 crowd at the Al Sadd Stadium, went closest through Yu Hanchao’s fine volley in the 87th minute, which went narrowly wide.

Qatar could have made it 2-0 but Uruguay-born Sebastian Soria fluffed his chance when clean through on goalkeeper Ren Hang.

Qatari coach, Jose Daniel Carreno, looked worried on the sidelines but his team held on for victory.

Hosts of the World Cup in 2022, Qatar are seeking to avoid becoming the first nation since Italy in 1934 to do so without ever playing in a finals beforehand.