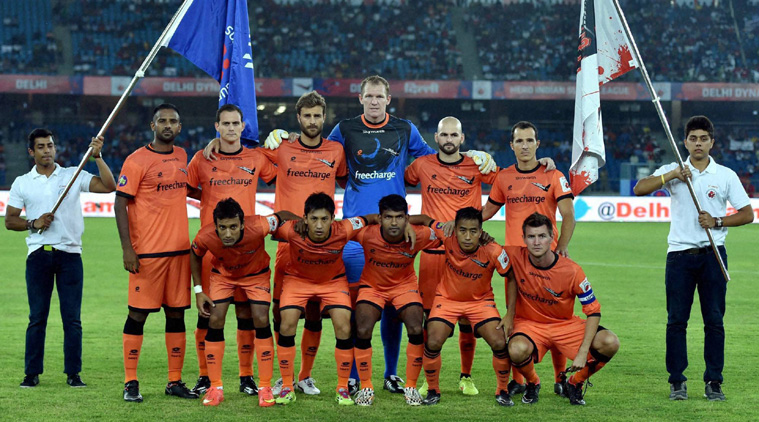 New Delhi: Having lost their opening encounter after a gritty fight, Delhi Dynamos would look to bounce back when they take on Chennaiyin FC in their first home match of the Indian Super League football season on Thursday.

Both teams are on even keel having lost their respective opening round encounters, Delhi and Chennai have almost the same issues to worry about as both will have to sort out their defensive woes while working on making their attack sharper.

Delhi began their campaign with a 0-2 loss against FC Goa on October 4 despite controlling the match in patches and having come close to scoring on a few times.

The Roberto Carlos-coached side would now look to come up with a strong performance and record their first win in ISL 2 against a team whom they had beaten 4-1 last year in front of the home crowd while holding them to a 2-2 draw in Chennai.They thus start with a psychological edge at the Jawaharlal Nehru Stadium on Thursday.

These are early days in the league, but the Delhi defence, marshalled by Liverpool legend John Arne Riise, was the weakest link on that night at Fatorda Stadium at Margao and they should thank goalkeeper Sanjiban Ghosh for not losing by a bigger margin.

Delhi had the better possession against Goa but failed to find the back of the opposition net with the woodwork denying them a couple of times. Former French international and Chelsea playmaker Florent Malouda was at the thick of things in his first ISL match but his supplies went abegging on occasions.

Delhi, who are without national team striker Robin Singh due to India’s ongoing 2018 World Cup qualifying matches, would need to sharpen their attack if they want to breach the Chennaiyin defence known for compactness.

Marquee-player-cum-manager Carlos, the Brazilian 2002 World Cup winner, is expected to continue to turn out for his side though not for the full 90 minutes. In Goa, he came out at the beginning of the second half after his side were already 0-2 down in the match.

“I want to play from the beginning (of the match) and I am trying. But, it is very hard (to do that). Let young people do the job. I will help the team in the second half,” Carlos said.