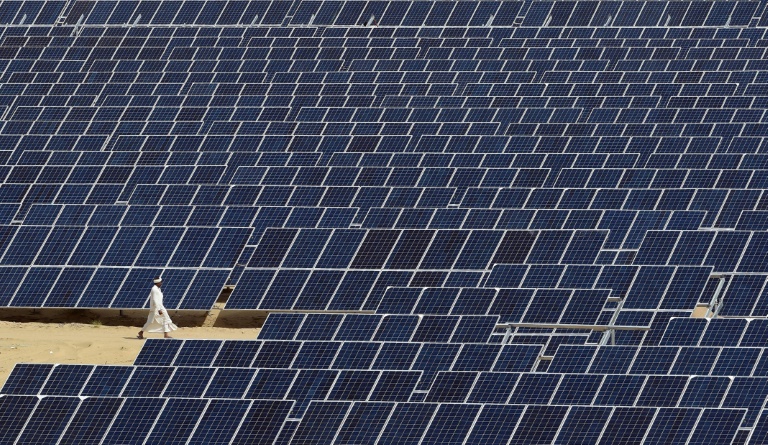 Up from $52 billion in 2013, the figure represented “significant progress towards the $100-billion goal”, said a report from the Organisation for Economic Co-operation and Development, an intergovernmental research body.

The new numbers will provide fodder for finance ministers and central bank chiefs meeting in Lima, Peru this week, where climate change is high on the agenda.

Cash flows from rich countries — both public and private — are a make-or-break component of the 195-nation UN climate talks tasked with delivering a comprehensive carbon-cutting pact in December.

“We’ve come up with a figure that we do think is credible,” said Simon Buckle, who oversaw the drafting of the report, the first attempt to pull together all the available numbers.

Requested by governments, the analysis lays out a much-needed framework for tracking how money earmarked for climate action moves between countries, development banks and private sources, the authors said.

Up to now the lack of clarity on whether money was public or private, in the form of grants or loans, or earmarked for greenhouse gas reduction or bracing for climate impacts, has blocked progress in the UN climate negotiations.

Developing nations, which have made finance a red-line issue, are wary of double-counting and the inclusion of non-climate projects in the final tally.

“The report provides transparency by breaking down the aggregate estimate of climate finance into its main financial elements,” the report said.

NGOs and analysts reacted with caution.

The report, they said, is encouraging but unlikely to satisfy poor nations looking for hard assurances.

The promise to pony up at least $100 billion in climate aid per year from 2020 was one of the few concrete decisions to emerge from the troubled 2009 UN climate summit in Copenhagen.

Another was the goal of capping average planet warming to two degrees Celsius (3.6 degrees Fahrenheit) above mid-19th century levels.

The OECD analysis does not make projections to 2020.

“The positive signal is that climate finance flows are on a upward trajectory,” said Athena Ronquillo-Ballesteros of the World Resources Institute, a Washington-based think-tank. “Countries still have time to step up.”

“We were pleasantly surprised to see that the lion’s share of the number is actually public finances,” said Jens Mattias Clausen, a climate finance analyst with Greenpeace.

Most developing countries insist that the bulk of the promised money should be from public and government funds.

The report also offers the first estimated breakdown of money for both mitigation, or greenhouse gas reduction, and adaptation — preparing for the droughts, superstorms and water shortages which scientists say will be aggravated by global warming.

More than three-quarters of the money went to mitigation, a fact which is likely to upset poor nations demanding more cash to help them prepare for these impacts.

“This is a far cry from what developing nations are expecting,” said Clausen.

While the $62 billion is seen as encouraging, experts cautioned that there’s still a big gap to fill before reaching the 2020 goal.

There is also the question of what happens after that.

“The report doesn’t address the fact that the $100-billion figure itself is inadequate,” said Alden Meyer, a veteran climate policy analyst with the Washington-based Union of Concerned Scientists.

“Nor does it address how to assure that climate finance ramps up well beyond $100 billion a year after 2020,” he said by email.

Also left unmentioned is the hugely contentious issue of payouts for damages — past and future — caused by global warming.

Money for “loss and damage”, as it is called, would be over and above what is already pledged.

“A hundred billion dollars is peanuts when you look at what will actually be needed,” Clausen said.