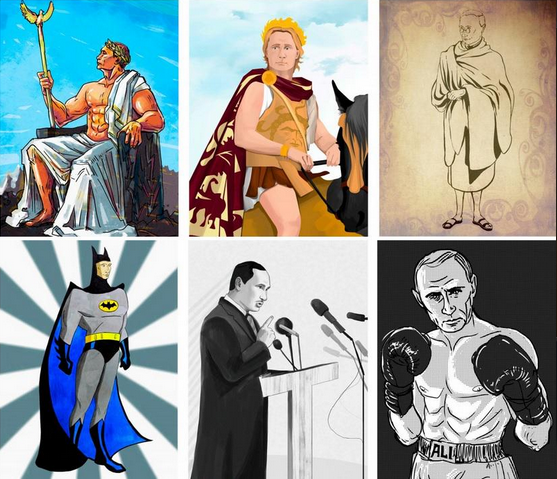 Vladimir Putin marked his 63rd birthday today with a focus on Syria, as supporters sang his praises comparing him to a range of heroic figures from Buddha to Batman.

The Russian President has been back in the international limelight since launching a bombing campaign against the Islamic State group in Syria last week, much to Washington’s chagrin.

The strikes followed Putin’s first address at the United Nations General Assembly in a decade and ended a period of isolation over Moscow’s seizure of Crimea from Ukraine last year.

Putin marked the occasion by holding a meeting with his Defence Minister before taking to the ice in the Olympic city of Sochi to play hockey with government officials and sports stars.

Ordinary Russians and celebrities traditionally sing Putin’s praises on his birthday, and this year was no exception, with rapper Timati releasing a new video clip extolling the return of his “best friend” to the big stage.

“He is in charge, so everything will be according to plan,” the lyrics say. “My best friend is back in the game.”

Supporters also rolled out a new exhibition of flattering paintings, depicting Putin in various heroic guises, including the black-clad Matrix protagonist Neo, the Buddha in lotus position, Che Guevara in his black beret and Mahatma Gandhi.

“Vladimir Putin’s character is the embodiment of heroism, fairness, slyness, intellect, courage and charm,” the exhibition organisers said in a statement.

Milos Kojic, a Serbian political expert who helped put together the display in central Moscow, told AFP: “We just want to thank him for the job he is doing for the whole planet.”

Kojic said the paintings were the works of Putin admirers who are members of his fan group on Facebook.

The same fan group was behind a similar exhibition last year, designed to symbolise Putin’s achievements and comparing them to the “12 Labours of Hercules”, the Greek demigod renowned for his strength.