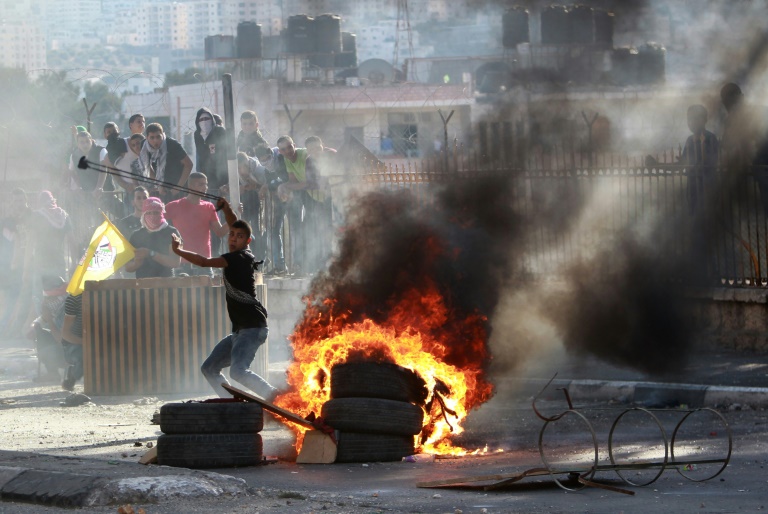 New violence rocked Israel and the West Bank on Wednesday, including a stabbing in annexed east Jerusalem, even as Israel and Palestinian president Mahmud Abbas took steps to ease tensions.

The knife attack in Jerusalem’s Old City, in which a Palestinian woman stabbed a Jewish man before being shot and seriously wounded, was the second in the walled heart of the city in days.

An Arab man also allegedly stabbed a soldier in central Israel and stole his weapon before being shot dead by police, while in the West Bank settlers shot and seriously wounded a Palestinian after a stone throwing incident.

Israeli Prime Minister Benjamin Netanyahu postponed a visit to Germany set for Thursday to tackle the violence that has raged for three weeks despite appeals for calm.

Security officials from the two sides had met on Tuesday evening after the Palestinian leader said he did not want a violent escalation.

Israel lifted age restrictions from Wednesday on Muslims praying at the sensitive Al-Aqsa mosque compound in an apparent bid, swiftly welcomed by Washington, to ease tensions.

In Wednesday’s Old City attack not far from the mosque compound, police said that an 18-year-old Palestinian woman stabbed a 35-year-old Jewish man in the back and lightly wounded him.

The man, who was armed, managed to draw his gun and shoot and seriously wound his attacker, police said.

Separately, in Kiryat Gat in central Israel, police shot dead an Arab man after he allegedly wounded a soldier with a knife and took his weapon, authorities said.

An incident in the occupied West Bank saw Jewish settlers shoot and seriously wound an 18-year-old Palestinian near Bethlehem, the Red Crescent and witnesses said.

In the same area, where both Israeli settlements and Palestinian villages are located, a group of Palestinians had sought to take an Israeli woman from her car and possibly kidnap her, said Israeli military spokesman Arye Shalicar.

According to Shalicar, settlers fired in the air and she was able to escape.

In moves to calm the situation, Israeli and Palestinian security officials reportedly met at an undisclosed location in the West Bank on Tuesday evening for talks.

His intentions had previously been unclear, particularly after a speech he gave to the UN General Assembly last week in which he declared he was no longer bound by accords with Israel.

Netanyahu has spoken of “no limits” for the security forces in responding to the unrest, and the military in a show of force on Tuesday demolished the homes of two Palestinians who carried out attacks last year.

On Tuesday, Netanyahu seemed to ease his rhetoric while at the same time visiting the site of a drive-by shooting in the West Bank in which a settler couple were murdered in front of their young children in their car last week.

The spike in violence has brought international calls for calm, with concerns the unrest could spin out of control and escalate into a new intifada like those of the early 2000s and 1987-93.

He said a “prompt and transparent” probe into the killing of a Bethlehem teenager by the Israeli army during rioting on Monday would serve to determine “whether the use of force was proportional”.

Troops shot dead 13-year-old Abdel Rahman Abdullah on Monday — the second killing of a Palestinian in 24 hours — as dozens were wounded in clashes.

After Abdullah’s funeral on Tuesday, about 100 masked youths stoned soldiers who responded with tear gas and rubber bullets.

Palestinian medics said two protesters in the usually quiet oasis town of Jericho were moderately wounded by shots to the legs.

Violence also hit the heart of Israel as Arabs in the Tel Aviv district of Jaffa marched Tuesday in protest at Israeli actions at Jerusalem’s flashpoint Al-Aqsa compound.