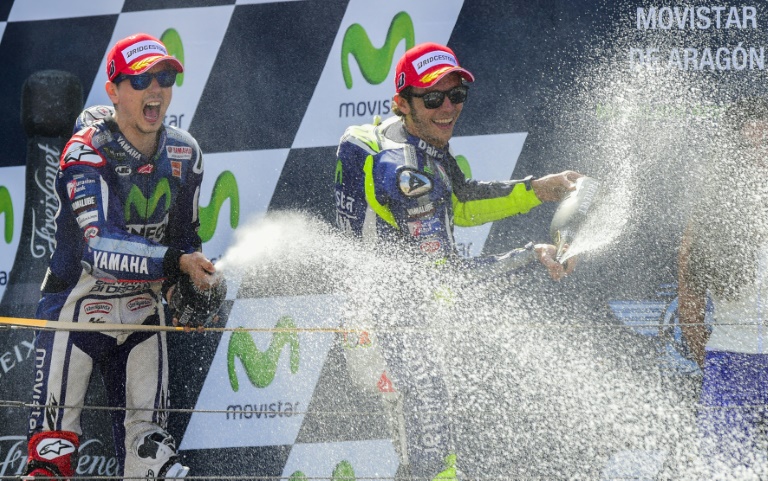 Valentino Rossi is facing intensifying pressure from Yamaha teammate Jorge Lorenzo, who could use this weekend’s Japanese Grand Prix to narrow their gap as the season finale draws near.

Nine-time world champion Rossi is leading the field with 263 points as he steadily marches toward his first world title since 2009.

But Lorenzo is storming right behind him with 249 points and is gathering momentum after the latest victory two weeks ago in Aragon where he picked up a precious 25 points while the Italian had to settle for 16 points.

The battle in Motegi will kick off three back-to-back races in this month that will bring the riders also to Australia and Malaysia.

Lorenzo has a history of outperforming his rivals at the Twin Ring Motegi circuit, known for its stop-and-go layout with hard acceleration and braking points — often seen as a course more friendly to Honda’s machines than Yamaha’s.

“The championship is amazing in this last part of the season but from now on we need to stay more focused if we want to keep the momentum and try to win the title,” Lorenzo said.

“Next stop is Japan, a place where I have good memories, especially from the last two years. This year we go there eager to do another great battle so hopefully we could do another nice race and try to make the championship tighter,” he said.

Meanwhile, Rossi has steadily shown off his riding finesse through the season, pulling 13 podium finishes in the 14 races so far, including four first-place finishes.

And the Italian is well aware of the narrowing lead he has over Lorenzo.

“These points may seem a lot but they are few,” Rossi said.

“There will be three races in a row and it will be important not to make any mistakes, but at the same time make sure to get the best possible results. I feel good,” he said.

Reigning world champion Marc Marquez on Honda trails the Yamaha duo as a distant third after having suffered a string of crashes and injuries, including a fresh “left pinky finger” injury that forced him to undergo surgery last week.

The Spanish sensation — season champion in both 2013 and 2014 — has collected 184 points with seven podium finishes, including four wins.

He has crashed out in five races this season, including in Aragon where he had the seventh pole start of the year but came off in the second lap as he chased Lorenzo.

Marquez pledged to continue his troubled bid to defend his title.

“I know that I won’t be at 100 percent and the circuit at Motegi is very demanding, my injury will definitely cause me pain,” he said.

“Aragon was a tough race and I made a mistake, now I’m eager to get to Japan and try to end the season at the top,” he said.

“I’m healing well and hope to be as fit as possible for this weekend,” he said.