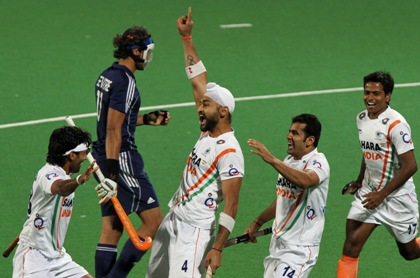 After losing the first match meekly on Tuesday, the Indians showed aggressive intent in their approach.

Nelson: Indian hockey is back on track and what more do you need as proof than a 3-1 whooping handed out to the Kiwis?

The Indian men’s hockey produced a much-improved performance on Wednesday as they defeated New Zealand in the second match to level the four-Test series 1-1 in Nelson.

After losing the first match meekly on Tuesday, the Indians showed aggressive intent in their approach as Ramandeep Singh gave the tourists an early lead in the 13th minute.

The Kiwis quickly switched back to attacking mode before securing an equaliser through Kane Russell on the stroke of third quarter.

However, forward player Lalit Upadhyay put the tourists back in the lead in the 52nd minute before Nikkin Thimmaiah sealed the game for India in the final minute.

India will now play the hosts in the third game of the tour at Christchurch on Friday.