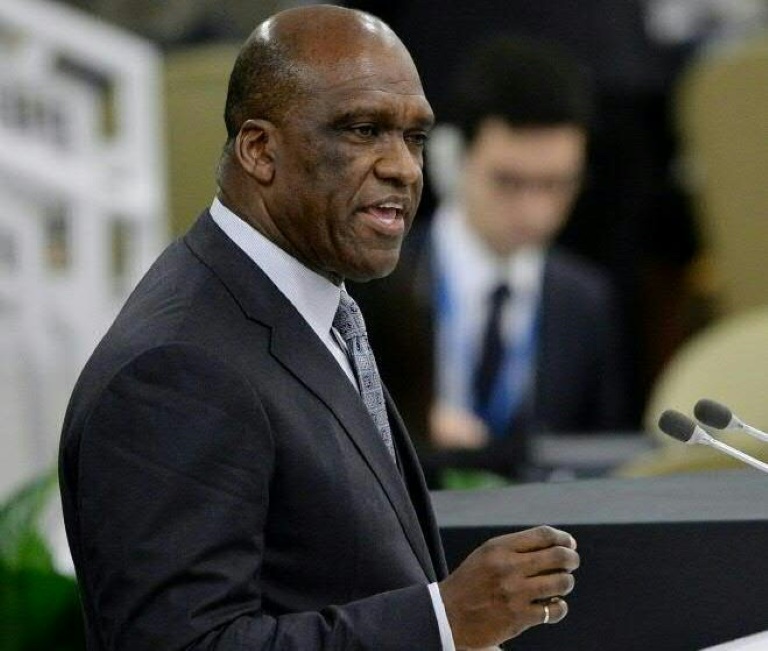 A former president of the UN General Assembly, John Ashe, was arrested on Tuesday and charged with taking $1.3 million in bribes from Chinese businessmen in a corruption scandal that stunned the world body.

UN Secretary-General Ban Ki-moon said he was “shocked and deeply troubled” by the charges, which were unprecedented in the UN’s 70-year history.

Ashe, who served as assembly president for a year from September 2013, allegedly took bribes in exchange for backing a proposed UN conference center in Macau promoted by a wealthy Chinese developer Ng Lap Seng.

The 61-year-old former UN ambassador for Antigua and Barbuda was arrested at his home in Dobbs Ferry outside New York and three others were jailed in the wide-ranging scheme.

“If proven, today’s charges will confirm that the cancer of corruption that plagues too many local and state governments infects the United Nations as well,” US attorney Preet Bharara told a news conference.

Bharara said the former UN assembly chief “sold himself and the global institution he led” for Rolexes, suits and a private basketball court all paid for by the wealthy Chinese developer.

“Among other things, Ashe accepted over $500,000” from Ng who was “seeking to build a multi-billion dollar, UN-sponsored conference center in Macau,” the complaint said.

In exchange for these payments, Ashe submitted a request to Ban “which claimed that there was a purported need to build the UN Macau Conference Center.”

Ng and others used the March 2012 letter from Ashe to promote the conference center which was to house a “Global Business Incubator” to foster South-South cooperation in the private sector.

Ashe was the UN ambassador from Antigua and Barbuda when he wrote the letter.

Ng was arrested and jailed in New York last month for smuggling more than $4.5 million in cash into the United States over a two-year period.

The complaint also cited Francis Lorenzo, a UN deputy ambassador from the Dominican Republic, Shiwei Yan, Jeff Yin and Heidi Hong Piao as conspiring in the corruption scheme. Yin was arrested along with Ng last month.

The five are accused of using a fake non-government organization to carry out the bribery scheme. Lorenzo, the NGO’s honorary president, was paid a $20,000 salary.

Details of Ashe’s luxurious lifestyle were listed in the documents including two Rolex watches worth $54,000, a $40,000-lease for a new BMW luxury car, expensive tailored suits from Hong Kong worth $59,000 and Gucci purchases totalling more than $5,000.

UN spokesman Stephane Dujarric said UN officials first learned of the charges when media reports surfaced on Tuesday and had not been contacted by the US authorities to help in the investigation.

“The secretary-general was shocked and deeply troubled to learn this morning of the allegations against John Ashe, which go to the heart of the integrity of the United Nations,” he added.

Ashe received $800,000 in bribes from Chinese businessmen to advance their interests at the United Nations and with the Antigua government including with the prime minister who received a cut of the bribe money, the documents said.

Ashe, who served as UN ambassador until November 2014, allegedly took payments to cover personal expenses such as family vacations and construction of a basketball court at his house.

Details of Ashe’s luxurious lifestyle were listed in the documents including a $40,000-lease for a new BMW luxury car, expensive tailored suits from Hong Kong worth $59,000 and Gucci purchases totalling more than $5,000.

The US attorney said Ashe had “formed a corrupt alliance of business and government, converting the UN into a platform for profit.”

The United Nations scheduled a news conference for 3 pm (1900 GMT) by the current president of the General Assembly, Mogens Lykketoft of Denmark.