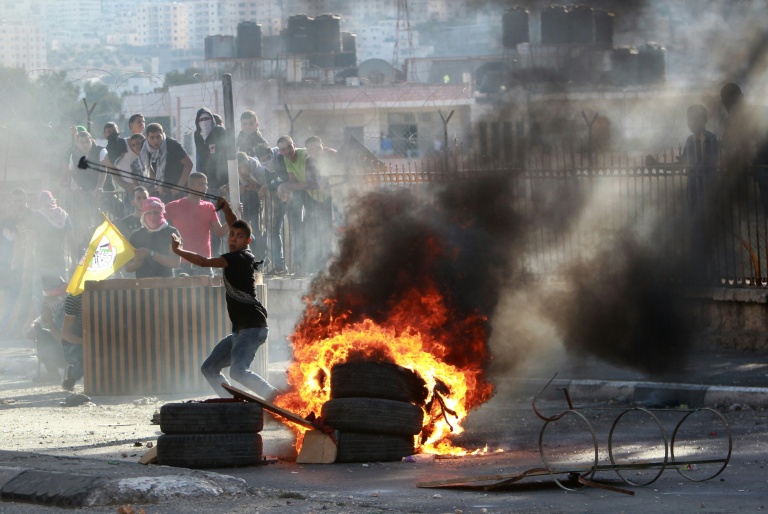 Palestinian president Mahmud Abbas said Tuesday he wanted to avoid a violent escalation with Israel as Israeli police lifted restrictions on worship at the Al-Aqsa mosque compound in an apparent bid to ease tensions after three weeks of violence.

Abbas’s remarks came as spreading unrest provoked fears of a new uprising and as Israeli and Palestinian officers met to discuss ways of defusing the situation.

Police spokeswoman Luba Samri announced that Muslims would be allowed to worship again at the Al-Aqsa mosque starting Wednesday — a move welcomed by US State Department spokesman Mark Toner as “a step in the right direction” after another day of clashes.

Acting on orders from Prime Minister Benjamin Netanyahu to step up punitive measures against Palestinian militants, Israeli security forces on Tuesday demolished the homes of two Palestinians who carried out attacks last year.

More clashes erupted later, including in Bethlehem following the funeral of a 13-year-old killed by Israeli soldiers in rioting outside the city.

Palestinian medics said two protesters in the usually quiet desert town of Jericho were moderately wounded by shots to the legs.

Violence also hit the heart of Israel as Arabs in the Tel Aviv district of Jaffa marched in protest at Israeli actions at Jerusalem’s flashpoint Al-Aqsa compound.

“Protesters, some masked, threw stones at police and assaulted and injured two officers,” Samri, the police spokeswoman, wrote in a statement.

The Palestinian news agency Wafa quoted Abbas as telling officials: “We are telling our security forces, our political movements, that we do not want an escalation, but that we want to protect ourselves.”

Abbas’s intentions had been unclear before his latest comments, particularly following his UN General Assembly speech last week when he declared he was no longer bound by accords with Israel.

The source did not disclose the content of their talks, but Israeli media said they were seeking ways to restore calm.

Tuesday’s demolitions came with Netanyahu under pressure from right-wing members of his coalition, which holds only a one-seat parliamentary majority, as clashes spread following the murder of four Israelis.

The spike in violence has brought international calls for calm, with concerns the unrest could spin out of control and with memories of previous Palestinian uprisings still fresh.

He said a “prompt and transparent” probe into the Bethlehem teenager’s killing would serve to determine “whether the use of force was proportional”.

The houses destroyed were the former homes of Ghassan Abu Jamal and Mohammed Jaabis, the military said. They had been under demolition orders after the men attacked Israelis last year.

Armed with meat cleavers and a pistol, Abu Jamal and his cousin Uday Abu Jamal killed four rabbis and a policeman before being shot dead in November 2014.

Jaabis rammed an earthmover into a bus in August 2014, killing an Israeli and wounding several others before police shot him dead.

Yasser Abdu, 40, a neighbour and friend of the Abu Jamals, accused Israel of a “policy of collective punishment”.

The pre-dawn demolition blast blew out the interior of Aby Jamal’s house but the supporting pillars remained intact. It also damaged other apartments in the building and surrounding structures.

A room was also sealed off at the former home of Muataz Hijazi, who in October 2014 tried to gun down a right-wing Jewish activist, critically wounding him. Hijazi was shot dead the next morning in a police raid.

The punitive measures come after clashes spread in east Jerusalem and the West Bank following the murders of four Israelis, including a Jewish settler couple shot in front of their children.

Israeli security forces said five men they had arrested over the couple’s murder were members of militant group Hamas. Netanyahu visited the site of the murders Tuesday and announced cameras would be set up along West Bank roads.

On Monday, troops shot dead 13-year-old Palestinian Abdel Rahman Abdullah — the second killing of a Palestinian in 24 hours — as dozens were wounded in clashes.

After Abdullah’s funeral on Tuesday, about 100 masked youths stoned soldiers who responded with tear gas and rubber bullets.

Rules for when security forces can open fire have also been loosened.

Israel lifted temporary restrictions Tuesday barring Palestinians from Jerusalem’s Old City, where only residents, business owners and students had been allowed in for two days.

It also lifted the restrictions on access to the Al-Aqsa compound which had since Sunday been limited to men aged 50 and above, although there were no restrictions for women.

The clampdown was imposed after two Israelis were stabbed to death in the Old City.

Around 300,000 Palestinians live in Israeli-annexed east Jerusalem, where the Old City is located.