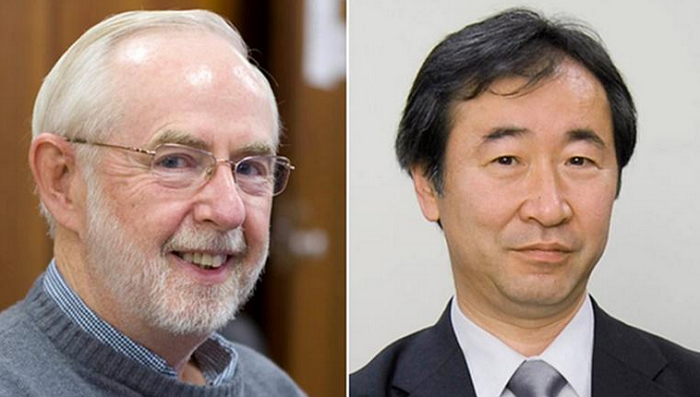 Stockholm: The Nobel Prize in Physics 2015 has been awarded jointly to Takaaki Kajita andArthur B McDonald for the discovery of neutrino oscillations, which shows that “neutrinos have mass”.

The Nobel Prize recognises Kajita in Japan and McDonald in Canada, for their key contributions to the experiments which demonstrated that neutrinos change identities. This metamorphosis requires that neutrinos have mass.

The discovery has changed our understanding of the innermost workings of matter and can prove crucial to our view of the universe.

Around the turn of the millennium, Takaaki Kajita presented the discovery that neutrinos from the atmosphere switch between two identities on their way to the Super-Kamiokande detector in Japan.

Meanwhile, the research group in Canada led by McDonald could demonstrate that the neutrinos from the Sun were not disappearing on their way to Earth. Instead they were captured with a different identity when arriving to the Sudbury Neutrino Observatory.

For particle physics this was a historic discovery. Its Standard Model of the innermost workings of matter had been incredibly successful, having resisted all experimental challenges for more than twenty years.

However, as it requires neutrinos to be massless, the new observations had clearly showed that the Standard Model cannot be the complete theory of the fundamental constituents of the universe.

McDonald, Ph.D. 1969 from Californa Institute of Technology, Pasadena, was born in Sydney, Canada. He is a Professor at Emeritus at Queen’s University, Kingston, Canada.