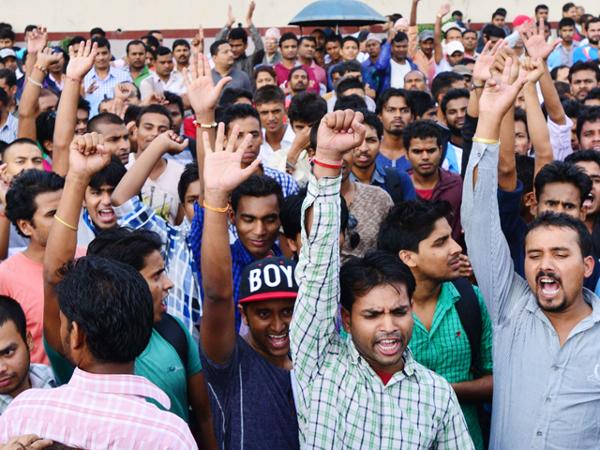 Birgunj (Nepal): Madheshi leaders here have criticised Nepali media reports that claim that border restrictions have been eased at key trading points along the Nepal-India border to allow Indian-licensed trucks to enter Nepal.

The leaders said that Nepal media was projecting wrong news deliberately, and added that India has nothing to do with the blockade.

They said that no trucks are being allowed to enter Nepal from India in the wake of a blockade imposed in protest against what they called a flawed new Constitution of Nepal, which has neglected the rights of Madheshis living in Nepal’s Terai region.

Madheshi agitators seem to be in no mood to withdraw their ongoing protest.

They are continuing with their blockade in some parts along the Indo-Nepal border, with some of them staging the sit in no man’s land. The Madheshi leaders have warned that their agitation will continue till their demands are not met by the Nepal Government.

On Sunday, according to a Himalayan Times report, top leaders of the parties that are a part of the United Democratic Madhesi Front (UDMF) reviewed the ongoing agitation that has been on the Terai districts of Nepal since mid-August.

According to the local daily, the Chairman of Terai Madhesh Democratic Party, Mahantha Thakur, FSFN Chairman Upendra Yadav, Sadbhawana Party Co-Chairman Laxman Lal Karna and Chairman of Tarai Madhesh Sadbhawana Party Mahendra are likely to sketch out a new strategy in the wake of the government inviting all agitating parties for talks to address their concerns regarding the provisions in the newly promulgated Constitution.

On Sunday, over 100 trucks, carrying essential goods and petroleum products entered Nepal from India, ensuring some respite for the people who are grappling with a shortage of fuel and other essential commodities due to the blockade of key trading points along the Nepal-India border by protesters objecting to the new Constitution.

The Raxaul-Birjung check point, which is the main entry point on the Indo-Nepal border, continues to be obstructed, making life harder for the people.

India’s Ambassador to Nepal Ranjit Rae reportedly met Prime Minister Sushil Koirala on Sunday to discuss issues related to the ongoing blockade and resumption of supplies from the Indian side.