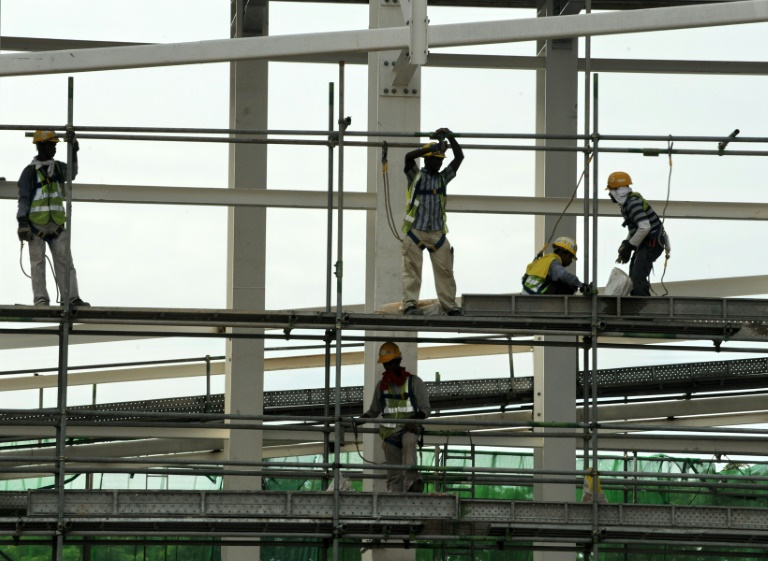 The International Monetary Fund cut its growth forecasts for the world economy Tuesday, warning of increasing risks from the slowdown in China, which is dragging other emerging markets down with it.

The global economy will expand just 3.1 percent this year and 3.6 percent next year, the IMF predicted, revising downward its previous forecasts by 0.2 percentage points in both cases.

Even though wealthy countries are showing signs of recovery, the world economy is on track for its worst year since the global recession of 2009, the IMF said in its latest report.

“Near-term growth remains moderate and uneven, with higher downside risks,” he told a press conference in the Peruvian capital Lima, where the IMF and World Bank are holding their annual meetings this week.

The slowdown in China — which the IMF predicted will grow 6.3 percent next year, its lowest rate in 25 years — is taking a toll on other emerging economies that depended on the Asian giant’s ravenous appetite for their raw materials.

Prices of oil, metals, minerals and other commodities have sunk as the world’s second-largest economy has cooled, jolting the emerging markets whose boom drove the world economy during the 2008-2009 crisis.

Once-mighty Brazil is facing a three percent recession this year — twice as bad as predicted in the IMF’s last outlook, in July — and Sub-Saharan Africa is set for growth of 3.8 percent, 1.2 points off the pace it registered last year.

Russia, another emerging giant, is in double trouble.

In addition to crashing prices for its oil exports, it faces Western sanctions over its role in the Ukraine crisis — putting it on track for a contraction of 3.8 percent this year, the IMF forecast.

“While the growth slowdown in China is so far in line with forecasts, its cross-border repercussions appear greater than previously envisaged,” the IMF said.

A looming decision by the recovering United States to raise interest rates is also hurting emerging economies as investors in search of higher returns stop parking cash there, the IMF said.

That reduced capital inflow is in turn taking a toll on emerging countries’ currencies.

Obstfeld hedged on when the IMF expected the US rate rise to come, saying only that it would be either this year or next.

“They’re making a data-driven decision, which the Fund supports,” he said.

The World Bank for its part had already warned emerging economies in June to “fasten seat belts” for the potential turbulence from the imminent tightening of US monetary policy.

The wealthy countries that were at the epicenter of the 2008-2009 crisis are meanwhile undergoing a nascent recovery that is “expected to pick up slightly,” led by stronger growth in Britain and the United States, said the IMF.

It predicted the US economy will grow 2.6 percent this year — up 0.1 point from its July outlook — and 2.8 percent next year.

But the advanced economies’ growth remains “modest,” the Fund said.

And it warned of lingering risks for the eurozone, predicting growth of 1.5 percent this year and 1.6 percent in 2016.

“Contagion risks from Greece-related events to other euro area economies, while lower than earlier in the year, remain a concern, as do risks from protracted weak demand and low inflation,” said the Fund, which is due to decide soon whether to take part in a third bailout program for Greece.

The IMF also warned of “geopolitical risks” from conflicts in Ukraine and the Middle East, and sounded the alarm for the first time on the refugee crisis in Europe.

Obstfeld said the crisis carried “immense” social and political costs. But he added that in the long term, the influx of refugees would be “positive for growth in Europe,” which will expand its labor force.

“Unfortunately it’s tragic for countries such as Syria, which are losing large proportions of their populations,” he said.