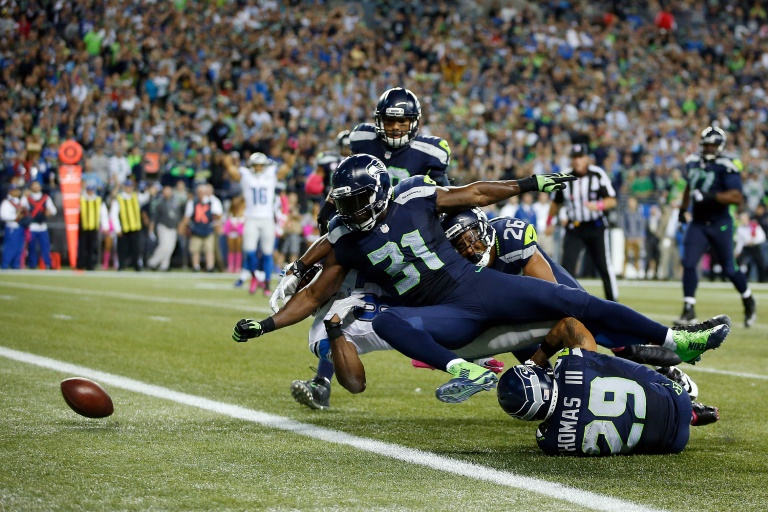 Seattle’s Kam Chancellor forced a Detroit fumble with less than two minutes to play as the Seahawks held on for a 13-10 victory that kept the Lions winless in this NFL season.

Chancellor punched the ball out of the hands of Calvin Johnson as the Lions wide receiver was lunging for the end zone.

With Detroit trailing 13-10, quarterback Matthew Stafford had driven the Lions from their own nine yard line to Seattle’s 11 yard line and on third down and one, with 1:51 remaining, he hit Johnson with a short pass.

But just as Johnson was reaching for the go-ahead touchdown, Chancellor knocked the ball away.

“The play Kam made was just extraordinary,” said Seahawks coach Pete Carroll, but the tight finish wasn’t without controversy.

The ball bounced through the end zone and was ruled a touchback, giving Seattle possession even though Seahawks linebacker K.J Wright had illegally batted the ball out the back of the end zone.

Wright’s intentional action should have been a penalty, which would have given the ball back to Detroit at the goal-line.

“What can you do,” said Lions coach Jim Caldwell, who discussed the issue with officials. “We’re not going to cry about it that’s for sure.

Carroll acknowledged that the Seahawks were “fortunate” the foul wasn’t called.

Although Chancellor’s game-saving move was the first turnover of the game forced by Seattle, the Seahawks defense looked more than solid in holding the Lions to 256 offensive yards.

Under near-constant pressure, Wilson completed 20 of 26 passes for 287 yards and a touchdown, displaying his creative scrambling abilities but also coughing up two of his team’s fumbles.

Wilson connected on a 24-yard touchdown pass to wide receiver Doug Baldwin in the second quarter to put the Seahawks on the road to a second straight win after their 0-2 start.

Detroit gained their only offensive score on a 41-yard field goal by Matt Prater that narrowed the gap to 7-3.

But Seattle answered with Steven Hauschka’s 51-yard field goal with one minute left in the second quarter to hold a 10-3 lead at halftime.

There was more bad news for Detroit, who saw defensive tackle Tyrunn Walker carted off the field with an ankle injury in the fourth quarter.