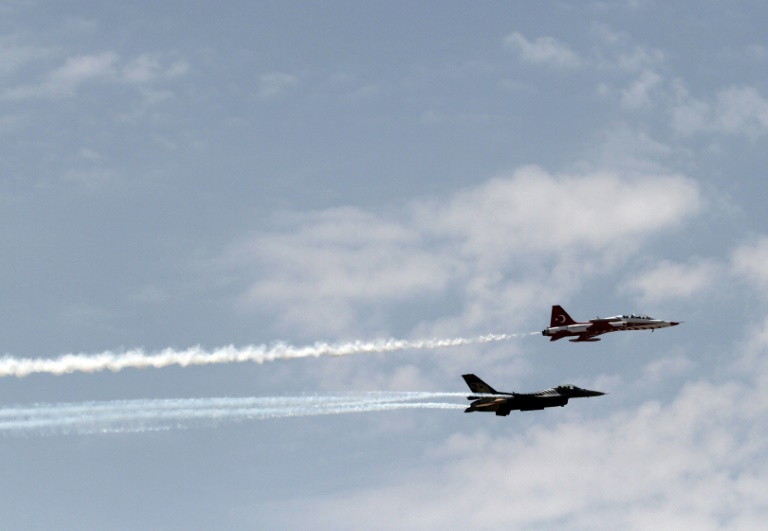 Turkey warned Russia on Monday against violations of its airspace by warplanes straying over the border from Syria, as NATO called an emergency meeting over the “unacceptable” intrusion.

Ankara, a NATO member, protested to Moscow after its F-16 jets intercepted a Russian fighter plane that violated its air space near the Syrian border over the weekend, forcing it to turn back.

“The Turkish Armed Forces are clearly instructed. Even if it is a flying bird, it will be intercepted,” he added, while playing down the idea of “a Turkey-Russia crisis”.

“Our channels with Russia remain open,” he said, hoping that Moscow would give up on “wrong attitudes”.

US Secretary of State John Kerry said the incident had risked provoking a serious escalation.

“We’re greatly concerned about it because it is precisely the kind of thing that had Turkey responded under its rights could have resulted in a shoot-down,” he said.

“I call on Russia to fully respect NATO airspace and avoid escalating tensions with the alliance,” Stoltenberg said.

Stoltenberg said ambassadors from NATO’s 28 member states would meet in the North Atlantic Council later Monday to discuss the situation.

Turkey and Russia remain on opposing sides of the Syrian conflict, with Moscow one of the few allies of President Bashar al-Assad while Ankara backs a solution excluding the embattled leader.

Russian warplanes have been flying over Syrian territory since Wednesday, conducting air strikes on what Moscow says are IS group targets in the country’s northern and central provinces.

The strikes have been criticised by opposition backers like the United States, which leads a coalition already carrying out raids against IS in Syria.

A US official said Monday the Russian air space violation was probably deliberate.

“I don’t believe that this was an accident,” he said.

On Monday, Russia’s defence ministry said its war planes had carried out strikes on nine IS targets including command centres and communications posts in three provinces in the past 24 hours.

The West has accused Moscow of mainly targeting moderate opponents of the regime.

More than 40 of Syria’s most powerful rebel factions said Monday that Russia’s air campaign had “cut the road to any political solution” and urged a regional coalition to fight the regime and its allies Russia and Iran.

Some of the statement’s signatories, like the Islamist Ahrar al-Sham and moderate Jaish al-Izzah, have been targeted by Russian strikes.

IS has seized large parts of Syria and neighbouring Iraq, committing atrocities including beheadings, rape and mass killings, and destroying archaeological and cultural heritage.

On Sunday the jihadists blew up the Arch of Triumph in Syria’s ancient city of Palmyra, the country’s antiquities director Maamun Abdulkarim said.

“This is a systematic destruction of the city. They want to raze it completely,” Abdulkarim told AFP.

UNESCO chief Irina Bokova slammed the latest demolition, which comes after the group razed other parts of the site, including the 2,000-year old Temple of Bel.

“Extremists are terrified by history and culture,” she said, vowing there would be “no impunity” for those responsible.

Under IS’s extreme interpretation of Islamic law, artefacts are considered idolatrous, and must be destroyed, although the group has also smuggled and sold antiquities.

Analyst Charlie Winter of the London-based Quilliam Foundation think-tank said such destruction was a “low-risk, cheap” way for IS to raise its profile among potential new recruits and grab headlines.

Palmyra fell to IS in May, but the Syrian army has advanced towards the city from the west and there are fears that IS may speed up its razing of the ancient site as the army approaches.

IS has taken advantage of the chaos in Syria caused by the four-year civil war, which has killed more than 240,000 people and sent millions fleeing, to expand its influence in the country.

A year-long US-led air campaign has failed to vanquish the jihadists, and Western governments have warned that Russia’s involvement could make things worse.

US Defence Secretary Ashton Carter said Monday that Russia was pursuing a “losing strategy” in Syria.

“Russia has escalated the civil war, putting further at risk the very political resolution and preservation of Syria’s structure of future governance it says that it wants,” he said.