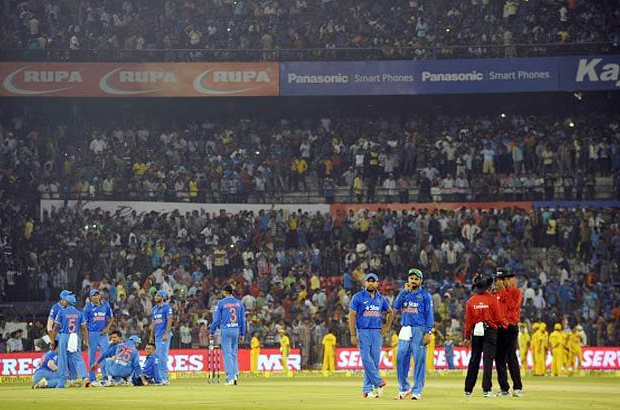 South Africa on Monday night clinched the Twenty20 series with a comfortable six-wicket win over a lacklustre India in the second match, which was marred by shameful and unruly crowd behaviour here.

The visitors overhauled the 93-run target with 17-balls to spare to take an unassailable 2-0 lead in the three-match series.

Put into bat, the hosts faltered against a disciplined South African attack to be bowled out for a paltry 92 in 17.2 overs and the crowd, unable to digest the pathetic batting display, started throwing water bottles onto the ground. This was India’s second lowest T20 score after their 74 against Australia at the Melbourne Cricket Ground in February 2008.

The spectators at the Barabati Stadium continued to throw bottles during the South African chase but could only delay the inevitable as Proteas cruised to victory.

It was a disgraceful behaviour by the crowd, who did not respond to repeated requests on the public system to keep calm putting a question mark on future cricket matches in the city. The behaviour also tarnished India’s image at the cricket venue.

For South Africa it was the bowlers who made the difference, with Albie Morkel (3-12) picking up three and Imran Tahir (2-24) and Chris Morris (2-16) sharing two wickets apiece.

After a brisk start provided by openers Shikhar Dhawan (11) and Rohit Sharma (22), the Indian batting lost the plot post some fine bowling and indecisive running by the batsmen.

Dhawan was the first to go after being trapped LBW off Morris, while Virat Kohli (1) and Rohit soon ran themselves out.

Leg-spinner Tahir also swung into action by scalping Suresh Raina for 22 as the Men in Blue looked down the barrel at 67 for five.

Morkel, who was drafted into the XI in place of Marchant de Lange, took care of skipper Mahendra Singh Dhoni (5) and Axar Patel (9) as Tahir and Morris kept up the good work.

The Faf du Plessis-led side also lost early wickets as off-spinner Ravichandran Ashwin (3-24) tried his best to defend a low score, but the visitors made it look simple in the end.

After the fall of Hashim Amla (2), Faf (16) and AB de Villers (19), Jean-Paul Duminy (30 not out) and Farhaan Behardien (11) made sure that Proteas stay comfortable in the chase. In the end David Miller (10 not out) stayed on with Duminy to get the win.