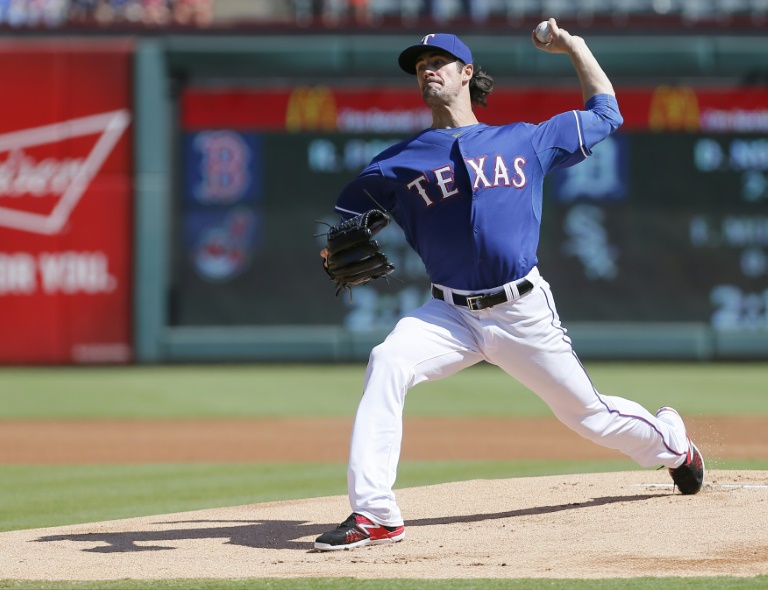 Cole Hamels pitched a complete game three-hitter as the Texas Rangers clinched the AL West title on the final day of the regular season with a 9-2 win over the Los Angeles Angels.

Left-hander Hamels’ pitching gem on Sunday came 24 hours after Texas used nine pitchers in a dramatic 11-10 loss to the Angels.

The loss eliminated the Angels, who came into the game with a wild-card shot and it set up an American League Division series matchup against the Toronto Blue Jays.

Hamels gave up two of his three hits in the first inning as designated hitter Albert Pujols gave the Angels an early 2-0 lead with a home run to centre field.

The Rangers got one of the runs back on the bottom of the first against right-hander Garrett Richards, who was pitching on three days’ rest.

But Richards kept the Rangers off the board until the fifth, when Texas third baseman Adrian Beltre hit a two-run homer to right field.

The Jays missed out on home field advantage throughout the playoffs when they lost 12-3 to the Tampa Bay Rays on Sunday. David Price will start for the Jays in game one of the AL Division Series against the Rangers on Thursday.

J.A. Happ pitched six strong innings as the Pittsburgh Pirates assured themselves of home field for the wild-card game against the Chicago Cubs with a 4-0 win over Cincinnati.

Third baseman Josh Harrison and catcher Francisco Cervelli each had three hits to help the Pirates, who will host the Cubs on Wednesday in the winner-take-all game.

The Cubs got six strong innings from right-hander Dan Haren and a two-run single in the first inning by first baseman Anthony Rizzo were enough for the Cubs to close out the regular season with 3-1 win over Milwaukee.

Chicago began the day with a chance to host the game, needing a victory and a Pirates loss.

In Los Angeles, left-hander Clayton Kershaw became the first major league pitcher in 15 years to strike out 300 batters in a season during the Dodgers’ 6-3 win over San Diego.

The Dodgers will enter the NL Division Series’ game one in Los Angeles on Friday against the New York Mets with a four-game winning streak.

Kershaw, who finishes the season with a career-best 301 strikeouts, became the first pitcher to collect 300 strikeouts since the Arizona Diamondbacks’ Randy Johnson and Curt Schilling compiled 334 and 316, respectively, in 2002.