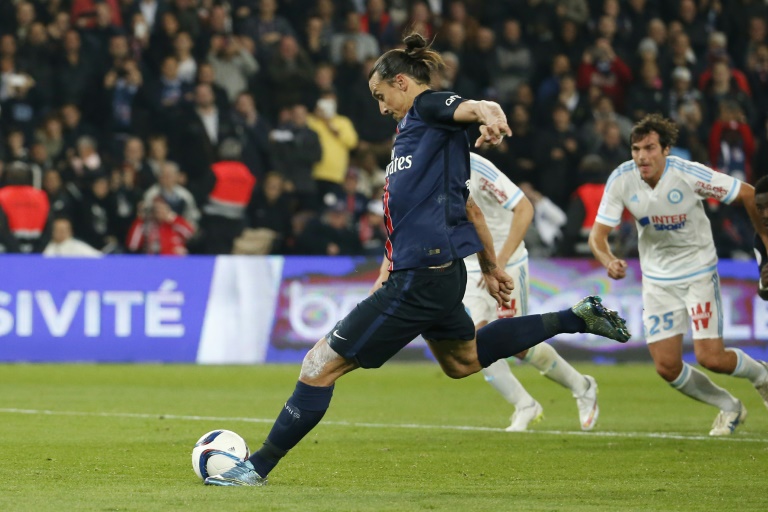 Zlatan Ibrahimovic became the leading goalscorer in Paris Saint-Germain history on Sunday as the reigning Ligue 1 champions extended their lead at the top following a 2-1 victory over arch-rivals Marseille.

Michy Batshuayi nodded in the opener after 30 minutes at the Parc des Princes to give Marseille the lead but Ibrahimovic tucked away a pair of penalties in the space of three minutes just before the break.

The second of those spot-kicks saw the Sweden striker surpass former Portugal international Pauleta’s 109-goal record and write himself into the capital club’s history books.

Kevin Trapp then ensured the home side’s lead remained intact early in the second half as he kept out an Abdelaziz Barrada penalty to help PSG extend their advantage over second-place Angers to five points.

PSG midfielder Blaise Matuidi said his side deserved to win.

“We knew Marseille would come here and give us a difficult match,” said the French international.

“They had nothing to lose but we scored the two penalities which changed things around. We played well and it was a good performance.

“It’s important that we keep our streak going and put results together but Marseille showed their place in the table is not deserved, althouth I don’t think they deserved to win tonight (Sunday).”

A minute’s silence was observed prior to kick-off for the victims of Saturday’s heavy flooding on the French Riviera that claimed 17 lives, with four people still missing.

The visitors needed an intervention from goalkeeper Steve Mandanda to deny Ibrahimovic on 22 minutes though as the France international raced off his line to block a follow-up effort from the Swede.

Mandanda then had to be at full stretch a few minutes later to prevent Angel Di Maria’s curling effort from nestling inside the far post.

Marseille very much remained a threat going forward, though, and duly took the lead on the half hour as Batshuayi beat David Luiz to Barrada’s cross to head past Trapp for his sixth goal this term.

But a woeful pass back towards his own goal from Belgian striker Batshuayi four minutes before half-time proved costly with PSG awarded a penalty after Mandanda collided with Ibrahimovic.

The Swede duly converted from the spot to draw level with Pauleta’s mark and repeated the trick three minutes later to put PSG ahead and claim the record outright of 110 goals after Rolando had handled following a corner.

Marseille won a penalty of their own 10 minutes into the second period as Serge Aurier sent Barrada sprawling but the Moroccan international saw his effort turned away by the German ‘keeper.

Javier Pastore should have put the game out of Marseille’s reach on 78 minutes but the Argentine substitute was thwarted by a stunning reflex save from Mandanda.

Earlier, Monaco’s stuttering early-season form continued as they were held to a 1-1 draw at home to Rennes, while Caen rose to third, level on points with promoted Angers, after beating Saint-Etienne 1-0.

Rennes, whose terrific start has somewhat subsided after a fourth draw in a row, took a first-half lead at the Stade Louis II through Abdoulaye Doucoure.

But Monaco fought back after the break with Brazilian Wallace scoring his first Ligue 1 goal to salvage a point for Leonardo Jardim’s men, who also had Danijel Subasic to thank for a second-half penalty save from Pedro Henrique.

Meanwhile, Caen registered a fourth win in five as Andy Delort’s 62nd-minute goal was enough to give them all three points against Saint-Etienne as Les Verts slumped to a second successive defeat, having entered the weekend in second.

Lorient rallied from a goal down to beat Bordeaux 3-2 with Benjamin Moukandjo, Majeed Waris and Zargo Toure all on target for the hosts after Diego Rolan had given Willy Sagnol’s men a first-half lead.

Both teams finished with 10 men as Lorient’s Lamine Gassama and Bordeaux’s Andre Biyogo Poko were dismissed near the end before Adam Ounas pulled one back for the visitors.