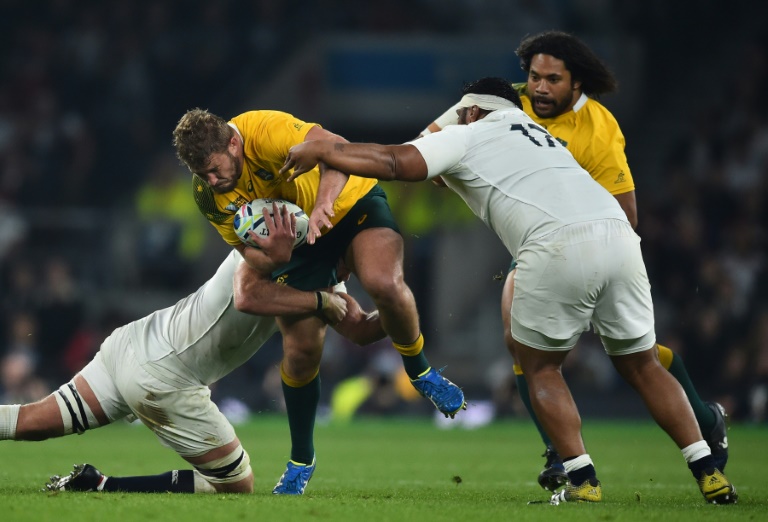 Australia believe they need to toughen the scrum that dominated against England as they wait to take on Wales and other looming World Cup opponents, prop James Slipper said Sunday.

“We have still got improvement in us,” said Slipper who reinforced the Wallabies for the second half of the 33-13 victory at Twickenham on Saturday night.

After the celebrations, Australia waited for news on the fitness of wing Rob Horne and star full back Israel Folau.

Horne was to have a scan Sunday on an arm injury that forced him to come off after just 11 minutes.

With the Wallabies already preparing for their key Pool A game against Wales next Saturday, conditioning coach Haydn Masters said there was no immediate news of Horne’s condition.

Folau came off in the second half. Masters said: “Israel is fine, just going through the motions of recovery. He rolled his ankle. He should be fine. Everyone else is pretty sweet.”

The Australian players surprised swimmers at a public pool in London on Sunday by turning up for a recovery swim.

“We have still got improvement in us,” said Slipper outside the pool. “Tomorrow we will sort out where we can improve and go from there.

“It is just a good time for us to knuckle down and not get carried away with what happened last night. Just try to improve.”

The scrum had been the centre of pre-match talk and Australia dominated the set piece throughout the Twickenham clash.

“I have been around for a while now and every time you come to Twickenham it is always the Talk of the Town, the scrum,” said the Queensland Reds captain.

“In the past we haven’t gone too well but last night it was pleasing to see that we did well.

“I think we can take a lot of confidence from that performance in the scrum.

“Having said that we have trained really, really hard and I think the squad mentality is really coming through.”

Slipper added: “The set pieces are a very important part of the game. When you get it right, it really sets up the team to do well and I really think we did that last night.

“Moving forward that is going to be a key area for us in each game, to make sure we turn up set piece-wise and give our backs the best ball possible.”