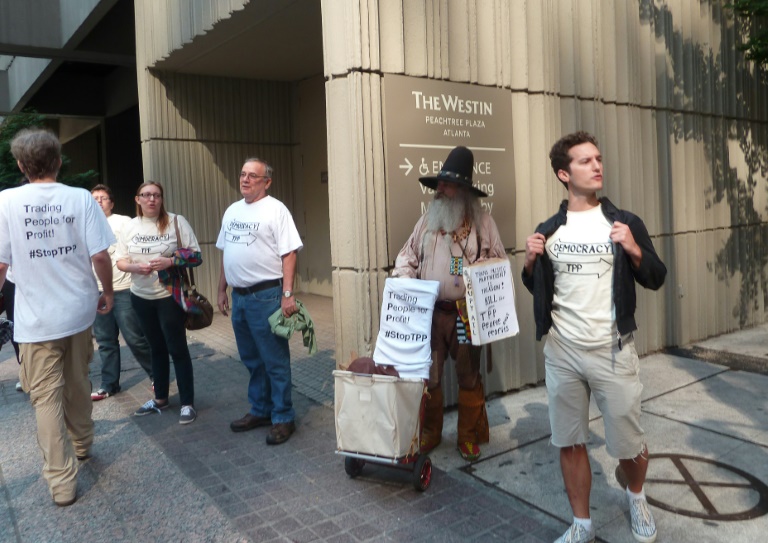 The US demand for longer protections for biologic drugs bogged down talks on the Trans-Pacific Partnership for another day on Saturday.

With the top-level negotiations to finalize the huge trade agreement already extended two days, Washington’s partners in the 12-country talks appeared to be stiffly resisting its push for much more than the five-year patent protections more widely accepted.

The United States, which has a 12-year standard domestically to protect the creations of pharmaceutical companies, was said to be willing to compromise at eight years, but Australia, Chile and Peru at least have resisted the push.

The issue is one of the last to be settled in the long-running TPP negotiations, along with still-sticky talks on freeing up markets for New Zealand and Australian dairy exports, a particularly sensitive challenge to Canada.

The partners — which also include Japan, Singapore, Vietnam, Brunei, Malaysia and Mexico — have already agreed on a broad range of issues, from handling foreign investor disputes to weakening protections for state enterprises to lowering barriers to trade in textiles and farm goods.

The trade ministers and other top officials in the talks were ready to let them spill over into Sunday but not beyond, according to officials involved.

A number had their eyes on their travel schedule: the G-20 group of leading economies is holding a meeting of trade ministers on Monday and Tuesday in Istanbul.

They had entered the talks on Wednesday under pressure to strike a final deal, after their talks in Hawaii two months ago failed.

The final issues included how much Canada and Mexico, privileged suppliers of auto parts to the US car industry under the NAFTA trade treaty, would allow that market to open up to Japanese car parts from other countries such as China and Thailand.

Also on the table was how much Canada would open up its heavily protected dairy sector to imports, a difficult political challenge that has taken on more weight ahead of the October 16 national elections.

Highlighting that issue, the opposition New Democratic Party declared Friday that they would not feel bound to back the TPP treaty being negotiated by the current Conservative government of Prime Minister Stephen Harper.

But the most difficult point has proved to be patent protection for biologics, cutting-edge drugs derived from living organisms, sometimes through genetic manipulation, that are proving valuable sources of treatments for everything from arthritis to cancer.

Critics of the TPP talks have long focused on the US call for longer patent protections, saying the result will be higher drug costs and more profits for pharmaceuticals while public health programs suffer.

Australia, which has five-year patent protection for the drugs, has said the US stance challenges its public health policy.

Protests outside the negotiations in Atlanta have focused on the biologics issue, and they have had the support of global health organizations like Doctors Without Borders. It says the lengthy US protections will give drug companies “monopolies” on treatments, preventing others from making generic-like “biosimilar” drugs that can be sold more cheaply.

On the other side is US industry, which is pushing through Congress — which must ratify the TPP deal — to defend the US standards.

A senior senator who enjoys close support from the drug companies, Orrin Hatch, sent a sharp warning Wednesday to the US team.

â€œNo one — at least no one from our side of the negotiations — should be in a hurry to close talks if it means getting a less-than-optimal result for our country…. If the agreement falls short, I will not support it.”