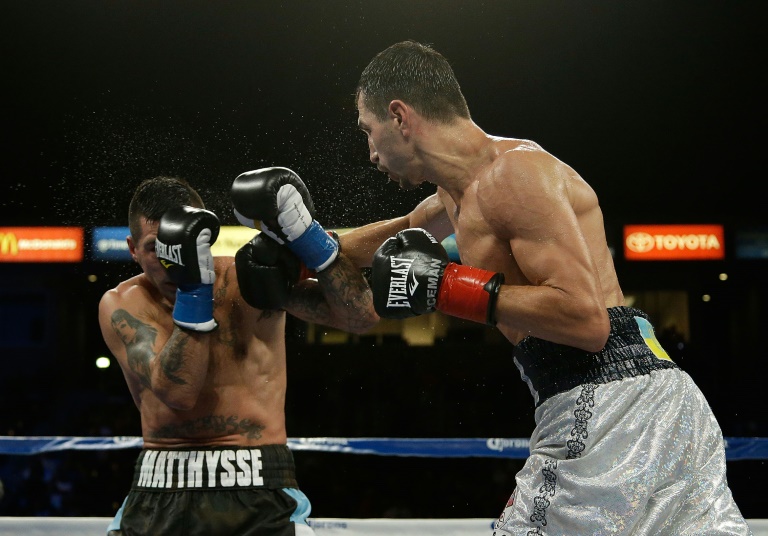 Viktor Postol floored Lucas Matthysse with a straight right hand in the 10th round to keep his unbeaten record intact and claim the vacant WBC super lightweight title.

The Ukrainian nailed Matthysse with a vicious right hand over a left jab that sent the Argentine to the canvas and ended the fight at the StubHub Center stadium in Los Angeles.

“I can assure you this is not going to be my last knockout,” said Postol, who improved to 28-0 with 12 knockouts. “I took a few hard shots. I can take a punch.”

Matthysse (37-4, 34 KOs) wasn’t able to handle the taller Postol, who had a substantial height and reach advantage but was regarded as the underdog.

Following the knockdown in the 10th, Matthysse — famed for his punching power — opted not to get back to his feet and he was counted out by referee Jack Reiss.

Matthysse was rubbing his left eye with his glove while on the canvas on one knee. He said he chose not to continue because he knew he had suffered some kind of eye injury from the hard punch.

“I felt something pop in my eye so to protect my eye I stayed down,” he said.

Postol did a lot of clinching throughout the fight but he also showed he can take a punch as Matthysse hit him with all he had at one point.

By the third round Postol had settled into a nice rhythm. He kept Matthysse at bay with his jab and his sideways movement prevented his opponent from getting set and being able to land.

A lunging Matthysse left hook at the end in the 10th was answered with a counter right on the chin and just like that Matthysse dropped to the canvas. He dabbed at the eye as Reiss began his count then stopped the fight at 2:58 of the round.

The unheralded Postol said he hopes that this win lands him a shot at WBO champ Terence Crawford.

“It would be a pleasure to meet him. I want to prove myself to American boxing fans,” Postol said.

Matthysse on the other hand might have lost more than just a fight Saturday.

Before the defeat there was talk he was in line for a fight with Filipino superstar Manny Pacquiao if he could get past Postol and look good doing it.