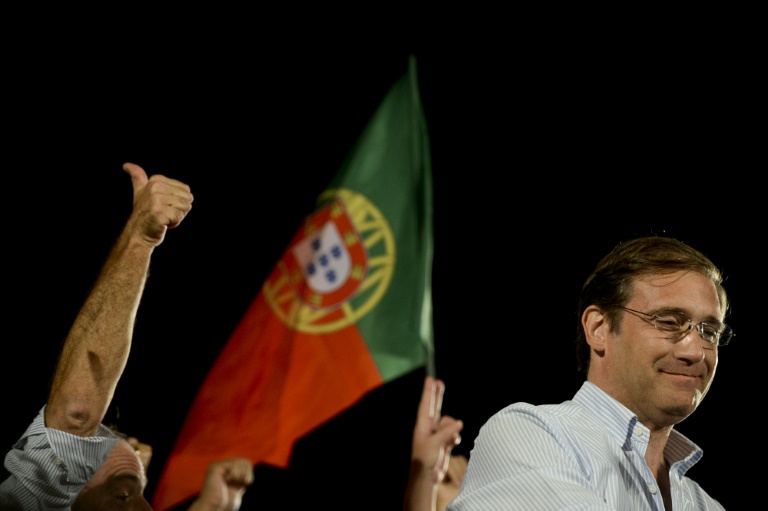 Portuguese voters cast ballots Sunday to give their verdict on four years of austerity by either re-electing the centre-right coalition that steered the country through a punishing bailout or turning to the Socialists who promise to ease painful reforms.

Prime Minister Pedro Passos Coelho’s “Portugal Ahead” coalition — joining his centre-right Social Democratic Party with the conservative Popular Party — has made a surprising comeback in opinion polls, with most putting it ahead despite the harsh cuts it has enacted.

The coalition, in power since 2011, had 37.5 percent support against 32.5 percent for the main opposition Socialists led by Antonio Costa, a popular former mayor of Lisbon, in the average of the latest surveys.

But neither side is likely to win an absolute majority in the 230-seat parliament.

Analysts warn that Portugal risks a period of political instability just as it seeks to safeguard an economic recovery after emerging from a debt crisis.

Polling stations opened at 8:00 am (0700 GMT), with the first results expected around 12 hours later.

Passos Coelho, a 51-year-old economist, is campaigning on his record of having navigated the country safely through the debt crisis and to a return to growth last year after three years of recession.

When he came to power in June 2011 Portugal was on the verge of defaulting on its mountain of debt.

His Socialist predecessor, Jose Socrates, had just asked for a 78 billion euro ($88 billion) bailout from the European Union and the International Monetary Fund, making it the third eurozone country after Ireland and Greece to receive a financial rescue package.

Portugal exited the bailout scheme in May 2014, but only after the government imposed harsh austerity measures and the biggest tax hikes in living memory.

The jobless rate has since fallen to 12 percent from a peak of 17.5 percent at the beginning of 2013.

But the recovery has yet to be felt on the streets. One in five Portuguese continue to live below the poverty line with an annual income of less than 5,000 euros ($5,600).

Unlike Spain or Greece, Portugal has not seen the rise of a protest party strong enough to challenge traditional parties at the polls.

The Greek crisis, which has been followed very closely by Portuguese voters, could even give a boost to the ruling centre-right coalition.

“The attempt by Greece’s Syriza party to put an end to austerity has failed. Suddenly Portuguese voters see that there really is not alternative” to austerity, political analyst Jose Antonio Passos Palmeira told AFP.

While Portugal’s Socialists have pledged to ease back on austerity and return more disposable income to households by lowering personal taxes and reversing public sector pay cuts, the party has promised to stick to European budget rules.

To reassure voters, Socialist leader Costa, 54, has had to distance himself from Socrates, who served as premier from 2005-11.

Socrates, 58, was detained in November 2014 on suspicion of corruption and money laundering and is currently under house arrest.

Costa hardened his tone in the final weeks of the campaign, saying his group would vote against the budget if the centre-right is re-elected.

Passos Coelho responded by warning that such a move could cause “instability that could lead to new elections in a very short time.”

The Socialists could block a minority centre-right government by joining forces with the Left Block and the Communists, which together have about 15 percent support.

With apathy gripping many voters, pollsters predict the numbers opting to stay at home may even surpass the record 42 percent recorded in the last election.