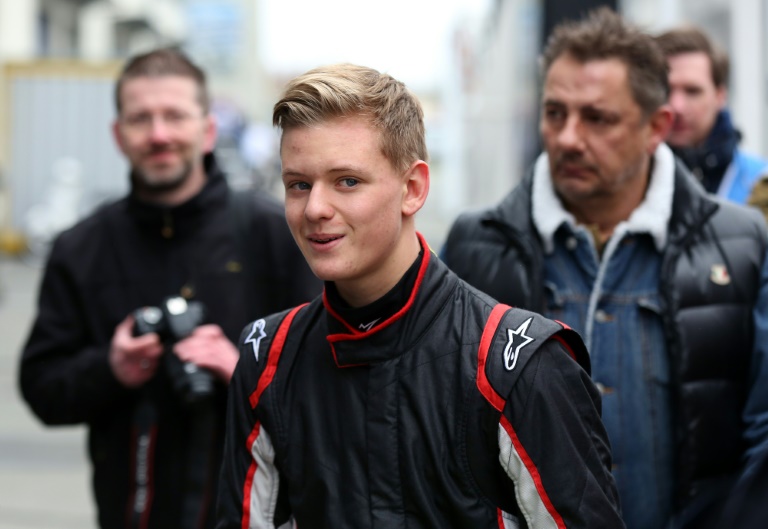 “The season was fun,” the 16-year-old told German broadcaster Sport1, “we’ll have to see about next year.”

His famous father enjoyed 91 wins and 155 podium finishes in his Formula One career while Mick Jnr’s introduction to motorsport was more modest.

Over the season’s 24 races, at eight venues, Schumacher Jnr made the podium twice for the Dutch team Van Amersfoort Racing, but many of his rivals have a few years’ experience at this level as 18-year-old Marvin Dienst won the series.

After the high of winning at Germany’s Oschersleben track in the third race on the opening weekend in April — when he won the best rookie trophy — Schumacher Jnr experienced a few setbacks.

He managed to finish third when the Formula Four series returned to Oschersleben in September and his highest finish in the three races at Hockenheim this weekend was fifth.

“Mick was lucky with his first win. Then things went a bit downhill, but then he found his feet and things improved.

“Now we see that Mick is a strong player in the field.”

Having graduated to Formula Four after a successful career as a Kart racer, Schumacher has got to grips with the faster car.

“The boys have grown up, just like the cars. It often happens with 16-year-olds, whether they are Mick Schumacher or anyone else,” said Van Amersfoort.

Michael Schumacher first retired from Formula One in 2006, after winning five titles in succession for Ferrari from 2000-2004 and then returned for the 2010, 2011 and 2012 seasons, but never finished higher than eighth overall.

As his father continues to recover from the serious head injury he suffered during a skiing accident in December 2013, Mick Jnr has largely been shielded from the media’s glare, thanks to Schumacher Snr’s manager.

“I am very pleased with how the season went, the learning curve was very steep and it was clear things wouldn’t continue as they had done in the first weekend,” said Sabine Kehm, Schumacher’s manager.

“For his athletic and personal development, it was a good year. We’ll now calmy look at how things will continue.”

One future option open to Schumacher Jnr is to graduate to Formula Three as Van Amersfoort compete in the higher class — one of the reasons the German teenager opted for the Dutch team.

But the German teenager will need to live up to the family name with regular victories if his career is to progress.

“Experience is important, but you can only progress in motor racing, when you have success, because success speaks for itself,” said Amersfoort.

However, Schumacher is likely to be snapped up by any motor racing team in Germany and is an asset to the Formula Four series, says the boss of the sport’s main sponsor.

“He is well-known and has a big name, which will always have a significance in Germany,” said Herman Tomcyzk, president of the sports arm of Formula Four sponsors ADAC.