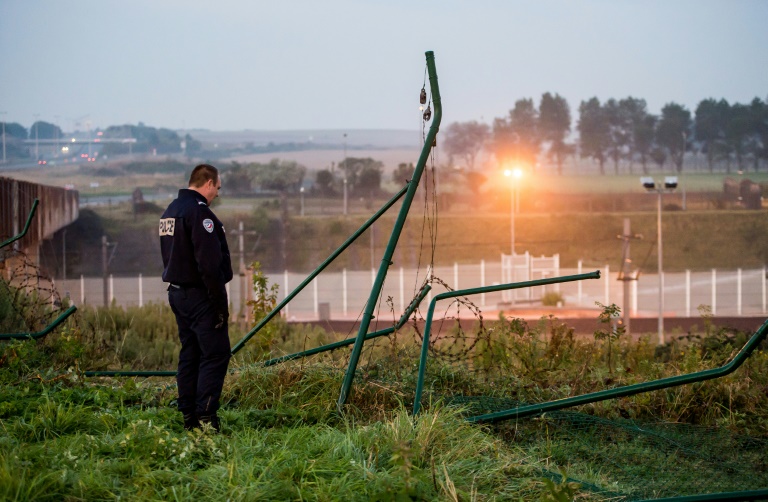 The French interior ministry on Saturday sent in extra police to boost security at the Channel Tunnel entrance in Calais after over 100 migrants got a third of the way through the tunnel to Britain and disrupted cross-channel traffic.

The attempt to go through the tunnel from France to Britain in the early hours of Saturday came as the daily flow of thousands of migrants and refugees flocking to Europe’s shores showed little sign of easing, with 168,000 arriving in September alone, UN figures showed.

Most are seeking refuge in Germany or Sweden, but others have continued their journey to France in the hope of somehow crossing the Channel to reach England.

Eurotunnel, which operates the complex, said the incident was unprecedented, with migrants aggressively attacking its staff.

“This has never been seen before, it was a determined and well-planned attack,” a spokesman told AFP of the incident, which took place shortly after midnight (2230 GMT Friday) at the entrance to the tunnel near the northern French port city of Calais.

He said the group “ran through the terminal, pinning a number of staff members to the ground and throwing stones at them.”

Traffic through the Channel Tunnel, which connects Britain and France, was halted for more than seven hours after a group of 113 migrants stormed into the tunnel.

Train journeys resumed later Saturday but with delays of up to three hours.

The regional prosecutor’s office said 23 of the migrants involved had been arrested and held in custody.

An extra 220 police, some armed, were being deployed to Calais to step up security, boosting the total presence there to around 750 officers.

Interior Minister Bernard Cazeneuve stressed that despite the extra security the “humanitarian objectives” of dealing with some very vulnerable people must not be lost.

As Europe struggles with its biggest migration crisis since World War II, thousands have made their way towards France’s northern coast seeking passage across the Channel to Britain.

Fabienne Buccio, head of the Pas-de-Calais region, said the group had demonstrated “a certain level of aggressiveness” during the breach.

“Normally they stop before the security forces, but this time they wanted to get through,” she told AFP, saying they had managed to get a third of the way through the tunnel, which stretches some 50 kilometres (30 miles).

Emergency services said a total of 10 people were slightly injured during the operation; seven migrants, two police and a Eurotunnel employee.

French border police were repairing a large breach of nearly 30 metres (yards) in one of the many fences around the site.

In August, the interior ministers of France and Britain signed an agreement to set up a new “command and control centre” to tackle smuggling gangs in Calais.

The move came after several weeks of attempts to penetrate the sprawling Eurotunnel site, the biggest of which was on August 3, when there were 1,700 attempts to get in.

Since then, major work to increase security has seen new barriers erected and more staff deployed along with sniffer dogs. The number of attempted break-ins has fallen to around 100 per night, police say.

Such attempts can be fatal: in the past three months, around 13 people have died while trying to reach the tunnel.

Meanwhile, at Hungary’s Beremend crossing on the border with Croatia, buses were awaiting to pick up the new arrivals after 4,987 people crossed on Friday, taking to 300,159 the total number who have entered so far this year.

Similar scenes were playing out on Croatia’s border with Serbia where buses were waiting to ferry the new arrivals directly to the Hungarian border. Zagreb said it had logged 5,000 new arrivals on Friday, taking the total since mid-September to 100,066 people.

Hungary is attaching razor wire to a fence erected at its border with Croatia, in a possible prelude to sealing the frontier to thousands of migrants.

Austria said it registered 2,683 new arrivals on Friday and another 2,363 in the early hours of Saturday.

Tens of thousands of people marched in the Austrian capital Vienna on Saturday in solidarity with the migrants.

“All the refugees are welcome. It doesn’t matter which war, persecution or other cause has pushed them to flee,” said a spokesman for the collective of pro-asylum groups that organised the show of support.