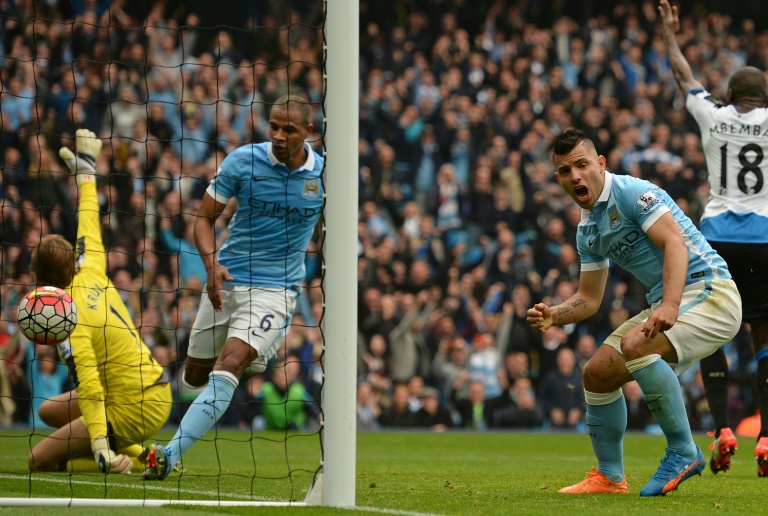 But Chelsea manager Jose Mourinho saw his team fall apart once again as they sank to a 3-1 home defeat against Southampton, which left the champions 10 points off the pace in 16th place.

City had lost their previous two league games and went behind in the 18th minute when Aleksandar Mitrovic headed home, but Aguero equalised in the 42nd minute before hitting the net again four more times.

“Sergio Aguero is different,” said Pellegrini. “In other games he was maybe having a lot of chances, but not scoring. Today he returned to his normal amount of chances he creates, but this time he scored.”

Aguero, 27, became the fifth player to score five goals in an English top-flight game since the launch of the Premier League in 1992 after Andrew Cole, Alan Shearer, Jermain Defoe and Dimitar Berbatov.

But Pellegrini’s decision to withdraw him in the 64th minute denied the Argentina international a chance to set a new record, with the City manager revealing that Aguero had required treatment on his hamstring at half-time.

Mitrovic had opened his Newcastle account with a header from Georginio Wijnaldum’s cross, but from there on it was all about Aguero at the Etihad Stadium.

He nodded in an equaliser, put City in front early in the second half with a deflected shot and dinked a shot over Tim Krul to complete his hat-trick, before De Bruyne looped a volley home from Jesus Navas’ cross.

Aguero’s fourth goal, on the hour, saw him curl a shot into the bottom-right corner from the edge of the box and two minutes later he had a fifth after tapping in De Bruyne’s low cross.

“Very happy about the five goals and the victory,” Aguero wrote on Twitter. “Thank you all for the encouragement and support. C’mon, City!”

Seeking to bounce back from their Champions League loss at Porto, Chelsea recalled captain John Terry and took a 10th-minute lead when Willian planted a free-kick in the top-right corner from wide on the left.

But Steven Davis rattled home a 43rd-minute equaliser from Graziano Pelle’s chested lay-off before an unsuccessful interception by Terry allowed Sadio Mane to run through and put Southampton ahead on the hour.

After Radamel Falcao had been booked for a dive in the Chelsea box, Pelle added a merited third in the 72nd minute, gathering a pass from Mane and arrowing a shot into the bottom-left corner.

It was the first time Mourinho had seen an away team score more than twice at Stamford Bridge in the league and it sealed Chelsea’s fourth defeat of the campaign — their worst start to a season in 37 years.

Earlier, Crystal Palace climbed to third place by beating West Bromwich Albion 2-0, with Yohan Cabaye teeing up Yannick Bolasie for the 68th-minute opener and then netting a late penalty.

Leicester City returned to the top four after winning 2-1 at Norwich City courtesy of goals from Jamie Vardy, who claimed his seventh goal of the campaign from the spot, and Jeff Schlupp.

West Ham United slipped to fifth place following a 2-2 draw at second-bottom Sunderland, whose manager, Dick Advocaat, is reported to be on the brink of leaving the club.

Steven Fletcher and Jeremain Lens, who scored a classy chip, put Sunderland 2-0 up, but Lens was then sent off for two bookable offences and goals from Carl Jenkinson and Dimitri Payet earned West Ham a point.

Pressed on his position after the game, Advocaat said: “I don’t want to give an answer. Today I am the manager. What will happen in the next weeks, months, I cannot say.”

Full debutant Glenn Murray scored but then squandered a late penalty as Bournemouth were held to a 1-1 draw by fellow promoted side Watford, for whom Odion Ighalo netted for the fifth time this term.