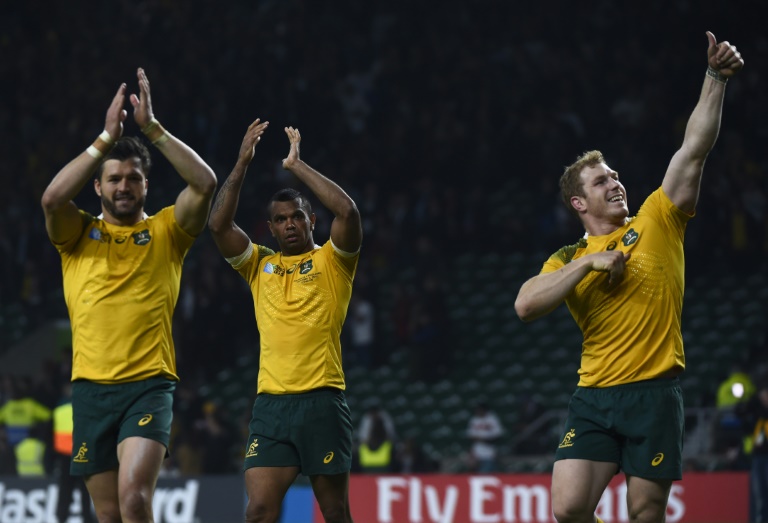 Australia will recalibrate their game plan to deal with a “totally different set of threats” from Wales in the battle to top Pool A, back row star David Pocock said.

After dumping hosts England out of the Rugby World Cup with a 33-13 victory at Twickenham on Saturday, Pocock said the clash with Wales on October 10 would be a completely different contest.

“You don’t want to get too carried away on one performance and there’s still plenty to go,” the 27-year-old Zimbabwe-born No8 said.

“I think the Welsh have a totally different set of threats there with the back row that they have.

“Their back row is pretty good on the ball so that’s obviously a focus for us.

“I feel they got some pretty good play against England. Taulupe Faletau is big and strong. He gets around, he’s a good ball carrier, solid in defence, everything you want from a No 8.”

Pocock said he was looking forward to a brief rest before getting to work on preparing to face Wales, who also have 13 points from three matches.

“We’ll enjoy this, recover well on Sunday, get a bit of time away from rugby and then on Monday we’ll get into it,” the Brumbies vice-captain said.

“Our whole approach has been to go from game to game and focus on that. We’ll have to do our homework and prepare well for it.

“After Wales, we’ll see what happens after that.”

The victors will top Pool A, giving them a clash with the second-best team from Pool B, one of South Africa, Scotland or Japan, in the quarter-finals.

“It was always going to be a tough group. We certainly weren’t coming into this game motivated by the fact that we could knock England out,” he said.

“It’s hard to say until you watch the tape again what made the difference. It was incredibly physical. I thought both teams looked to play some pretty positive rugby, throwing the ball around.

“Certainly from the 60th to the 70th minute we had to defend for long periods of time.

“There were a couple of good individual tries. Bernard Foley tonight was exceptional. Sometimes that’s the difference,” he said of the fly-half who scored two of the Wallabies’ three tries in a match haul of 28 points.

“It seems like the English press is pretty ruthless so it’s going to be tough for them,” he added.

Pocock praised the impact made by Australia coach Michael Cheika, who was appointed last October on a three-year contract.

“He’s very honest and you know exactly what he expects from you. I think that’s a pretty good starting point for a coach, trying to rebuild that and everyone’s really bought into it.

“I don’t know what the formula is but I guess that’s the basics of it. So far, so good.”