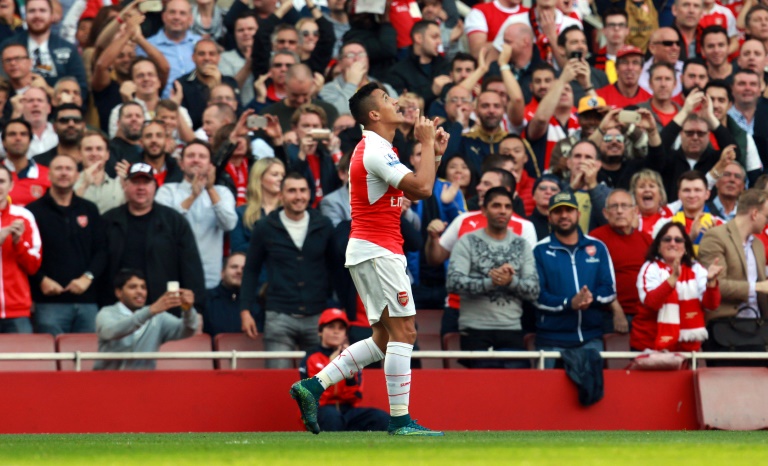 Alexis Sanchez scored twice as Arsenal reeled off a stunning 3-0 defeat of Manchester United on Sunday that sent Arsene Wenger’s side up to second in the Premier League.

Sanchez scored with a sixth-minute back-heel and Mesut Ozil slotted home from Theo Walcott’s cut-back a minute later before Sanchez’s 18-yard thunderbolt completed the scoring in the 19th minute at a giddy Emirates Stadium.

Sanchez has now scored six goals in three games and the Chilean’s latest endeavours helped Arsenal recover from the shock of their 3-2 home defeat by Olympiakos in the Champions League last Tuesday.

United would have gone top with victory, but instead they were left to nurse their wounds following the joint-heaviest league defeat of Louis van Gaal’s tenure as manager.

Earlier, Everton and Liverpool shared the spoils after an occasionally ill-tempered 225th Merseyside derby finished 1-1 at Goodison Park — the sixth draw in seven meetings between the teams.

Danny Ings put Liverpool ahead in the 41st minute when he was left unmarked inside the Everton six-yard box and nodded home James Milner’s corner.

But untidy defending by Liverpool allowed Everton to level in first-half stoppage time, with Romelu Lukaku slamming home after Emre Can’s attempted clearance had cannoned against his team-mate Martin Skrtel.

“It is a very good point,” said Liverpool manager Brendan Rodgers, whose side have won just one of their last nine games inside 90 minutes.

“It is a difficult place to come. We looked like we were getting better in our attack and defensively we were more cohesive.

“There’s no pressure for me. My worry is for the team and you have seen a response of how they feel.”

Meanwhile, Danish playmaker Christian Eriksen scored with a pair of fine 25-yard free-kicks as Tottenham Hotspur twice hit back to secure a 2-2 draw at Swansea City.

Swansea were twice in front, courtesy of a 16th-minute Andre Ayew header and a 31st-minute own goal by Harry Kane, but Eriksen replied on each occasion to extend Spurs’ unbeaten run to seven league games.

In the day’s other news, experienced Dutch coach Dick Advocaat stepped down as Sunderland manager after a return of three points from eight games left the northeast club second from bottom.

“This is a very special football club, with so many great people, but I feel it is the right time to do this — not for me, but for the club,” said Advocaat, who rescued Sunderland from relegation last season.