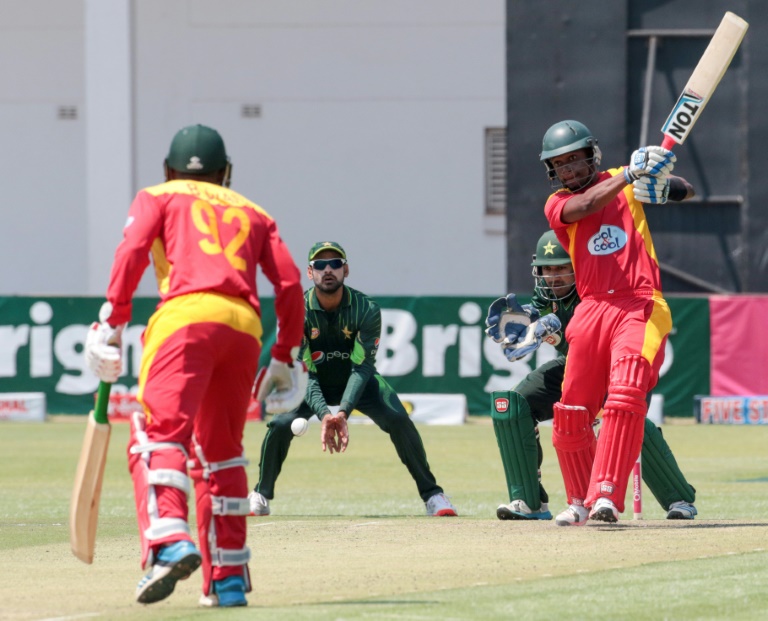 Shoaib Malik’s brilliant fightback was foiled by bad light as Zimbabwe beat Pakistan by five runs on the Duckworth-Lewis method in a drama-filled second one-day international at Harare Sports Club on Saturday.

Malik was left stranded on 96 not out having hauled Pakistan from 76 for six to 256 for eight chasing 277 for victory when the umpires took the players off the field with two overs remaining.

The game had earlier been delayed by a brief rain shower, but the decision left the 33-year-old batsman furious as he was denied the opportunity to carry his team across the line.

The result left the three-match series level ahead of Monday’s tour finale, and although Zimbabwe were breathing a sigh of relief after nearly letting the game slip, their victory represented a remarkable turnaround.

Under pressure after being rolled for 128 in an embarrassing defeat on Thursday, the home batsmen showed their capabilities in posting 276 for six, with Chamu Chibhabha anchoring the innings with a composed 90 and Elton Chigumbura adding the flourish with his brisk 67.

After winning the toss and electing to bowl, Pakistan were left to wonder whether they had underestimated their opponents in leaving out star performer Imad Wasim in order to give a debut to 30-year-old spinner Bilal Asif, who went wicketless as Zimbabwe took control of the game.

Chibhabha’s fifth half-century of the year led Zimbabwe’s much-improved effort, and included a 91-run stand with rookie Brian Chari and a 59-run partnership for the fourth wicket with Chigumbura.

“The partnership between Chamu and Chari set things up for us,” reflected Chigumbura. “There was lots of pressure for the team and the way we went out there today showed good character.”

Once Chibhabha had been caught behind off the bowling of Wahab Riaz, Chigumbura put on 62 runs in six overs with Sikandar Raza Butt before hitting his stumps to give Riaz a fourth wicket.

A tall target looked well beyond Pakistan when Zimbabweâ€™s seamers reduced them to 56 for five, and after Graeme Cremer removed Mohammad Rizwan to make that 76 for six, the game appeared to be up.

However Malik and Aamer Yamin counter-attacked in a brilliant 111-run stand for the seventh wicket, with the pair riding their luck as Zimbabwe dropped a series of catches.

Chigumbura appeared to have settled the game once more when he had Yamin strangled down the leg side for 62 and then ran out Riaz, but Malik continued to hammer away and enjoyed the support of Yasir Shahâ€™s unbeaten 32 from 22 balls.

Pakistan looked likely to get over the line with 21 needed from the final two overs, but the fading light had the final say.

“It was a lovely game,” said Pakistan captain Azhar Ali. “Malik and Yamin made us come back when it looked like a one-sided game.

“Zimbabwe played really well – we could have restricted them to under 250 but they played well at the end. We lost too many wickets at the start of our innings.”