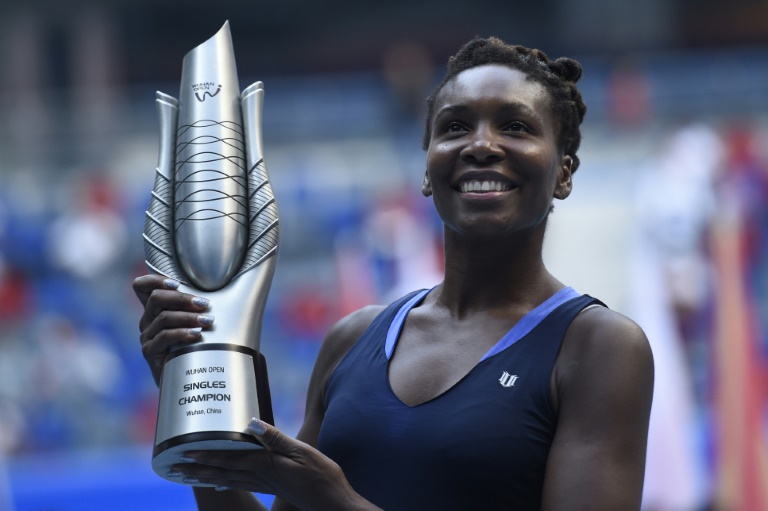 Venus Williams won her biggest title in five years at the Wuhan Open on Saturday after Garbine Muguruza retired, making her the fifth player to pull out mid-match in the late-season tournament.

Williams took the first set and was three games up in the second when the Spaniard stopped play at 53 minutes, handing the American veteran the 47th title win of her career, and her first victory at a WTA Premier Five event since she beat Victoria Azarenka in 2010 in Dubai.

Wimbledon finalist Muguruza — ranked world number eight, 16 places ahead of American veteran Williams — had a tough semi-final against Germany’s Angelique Kerber, winning in straight sets but falling during the closing tie break and injuring her ankle.

But the 21-year-old said it was exhaustion not injury that made her pull out.

“It’s a sad day I had to retire. Sometimes your body’s not recovered,” the 21-year-old said on court after the match.

Muguruza called her coach Sam Sumyk — who was wearing a t-shirt bearing the phrase “It’s not my fault” — on court during the first set but no words of advice could change the slow pace of the match.

“I had my chances. But I knew with Venus, it’s hard with her serve, with her shots, if you’re not 100 percent,” the Spaniard said.

Williams, who turned pro the year that Muguruza was born, was also struggling during the final with leg pain and had both of her thighs wrapped.

But she said that experience gained during her more than two-decade long career allowed her to put the injury out of her mind.

“By the time I’m on the court, I’ve blocked it (pain) out if I’ve decided I’m going to play. At that point I’m in the match and not anywhere else,” Williams said.

Williams had a gruelling semi-final the day before against her sister Serena’s nemesis Roberta Vinci — who beat Serena in the US Open semi-final, denying her a chance at the first calendar Grand Slam since 1988.

The title winner conceded that she would have had a tough match against Muguruza if her young opponent had been on form.

“I probably wouldn’t have had many chances if you (Muguruza) had been feeling well,” Williams said in an on court interview.

The 2006 women’s final at the Australian Open was also won on a retirement, with German Justine Henin-Hardenne handing France’s Amelie Mauresmo her first Grand Slam victory when she pulled out in the second set.

Novak Djokovic took his third consecutive title at last year’s ATP World Tour Finals when Roger Federer withdrew hours before the match blaming his decision on pain and his age.

Maria Sharapova led the charge of the walking wounded at Wuhan, retiring in the second set of her first match since Wimbledon.

The title win at Wuhan will put Williams inside the top 15 when the new rankings are released on Monday, after entering Wuhan as number 24.

The former world number one was diagnosed with an autoimmune disease in 2011, and while she continues to play some tournaments, she has struggled with her health and slipped down the rankings.

Williams could now qualify for the season-ending WTA championships in Singapore, which she has not reached since 2009.

Muguruza will also achieve a career high of five in the world rankings after making the finals at Wuhan, and is sure to qualify for Singapore, barring any major upsets in next week’s China Open in Beijing.