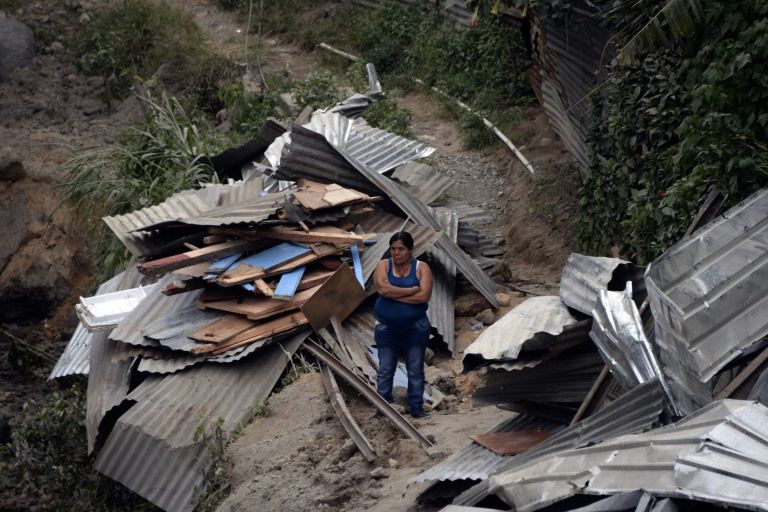 Rescuers resumed a desperate search Saturday for several hundred people believed missing in a village landslide on the outskirts of Guatemala’s capital, which left at least 30 dead.

At dawn, dozens of rescue workers, police, soldiers and volunteers with picks and shovels began clawing away at the debris left behind from the Thursday night disaster.

“We are removing debris to enter homes that are still under the mud,” firefighter Jose Hernandez, one of some thirty first responders on the scene Saturday, told AFP.

Nearby, several relatives of the missing checked in at a makeshift morgue set up next to the buried homes.

Families have reported receiving text messages from people they believed to still be trapped, more than 36 hours after the landslide struck the village of El Cambray II, in the municipality of Santa Catarina Pinula.

The affected area is about 15 kilometers (10 miles) east of the capital Guatemala City.

Authorities have said some 600 people are missing, and they expected the death toll to rise in the coming hours as the search resumes.

Their estimate is based on the 125 homes that Thursday’s landslide destroyed or damaged after heavy rain.

The victims include at least three children.

Thirty-four people have been pulled out alive from the mud and rubble, while 25 others were injured, CONRAD officials said.

The impact of the heavy rain was exacerbated by a nearby river, officials said. Municipal authorities had urged the community several times to relocate, most recently in November last year.

“The rescue job is very difficult because of the terrain — it’s practically as if it were a mountain,” Cecilio Chacaj, a rescuer with a local firefighter unit, said Friday.

Soon after Chacaj spoke to AFP he pulled out a survivor from the debris.

More than 500 workers, as well as desperate residents, searched for survivors late into Friday evening before suspending the painstaking hunt for the night.

President Alejandro Maldonado said that several countries, including the United States and Cuba, had offered to help.

“We are a beautiful country but unfortunately we are vulnerable to this type of catastrophe,” Maldonado told reporters.

Eight people had already died in previous weather-related events tied to Guatemala’s rainy season, which lasts from May to November, according to government data.

Last year’s rainy season was linked to 29 deaths and to damage to more than 9,000 homes.