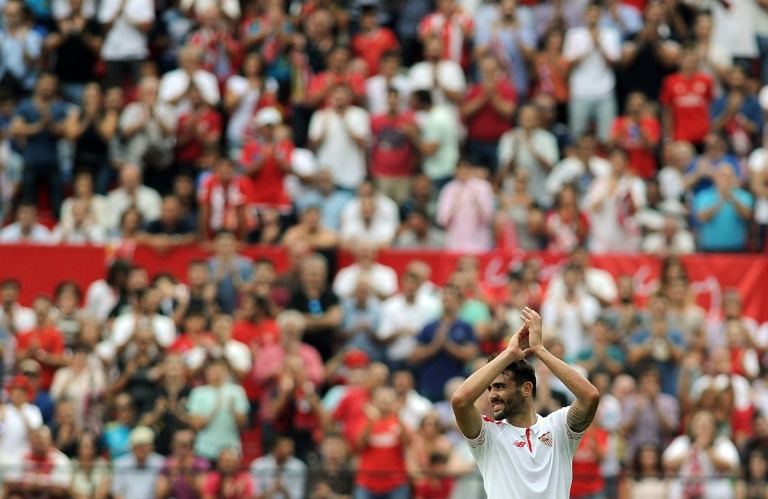 Barcelona’s struggles without Lionel Messi continued as second-half goals from Michael Krohn-Dehli and Vicente Iborra consigned the European champions to a second league defeat in three games 2-1 at Sevilla.

Neymar pulled a goal back from the penalty spot 16 minutes from time, but the injury-struck visitors were left to rue a host of missed opportunities and some fine goalkeeping by Sergio Rico as Sevilla registered their first league win over the Catalans since 2007.

Defeat leaves Barca still a point off leaders Villarreal, but they can now be passed by either Real Madrid or Atletico Madrid when they face off on Sunday.

“It is almost incredible that we go away from here having scored just one goal after seeing the ball ping around the opposition box,” said Barca boss Luis Enrique.

“We had 10 minutes in the second-half which have cost us when Sevilla were much superior. They got ahead, after that we tried in every way possible but we can only congratulate Sevilla for their effort and the result.”

Without Messi and Andres Iniesta the pressure was on Neymar and Luis Suarez to take even more responsiblity and the former forced Rico into his first save of the afternoon with a low effort after just five minutes.

Neymar’s runs from deep were causing Sevilla huge problems and Suarez should have done better when his shot was deflected wide by Timothee Kolodziejczak after being played in by his strike partner.

Claudio Bravo replaced the much-criticised Marc-Andre ter Stegen in the Barca goal after overcoming a calf injury and was regularly tested at the other end as he saved Kevin Gameiro’s header before denying the Frenchman from a narrow angle.

Suarez then had a goal rightly ruled out for offside as he raced onto another through ball from Neymar. However, the Brazilian was cleaned out by Marco Andreolli as he played the pass to concede a free-kick on the edge of the area.

Neymar’s effort hit the post, rebounded off Rico’s back and somehow trickled along the line before being hacked clear by Coke.

Suarez had two more chances to give Barca a half-time lead but failed to properly connect after a neat one-two with Ivan Rakitic and then saw a cute chipped effort come off the top of the crossbar.

Sevilla, who had won just once in six league games prior to Barca’s visit, took control early in the second-half as Krohn-Dehli timed his run into the box to sweep home Gameiro’s dangerous low cross.

The Dane was also involved in the second six minutes later as his floated cross was nodded home by Iborra.

Rico then pulled off a hat-trick of brilliant saves from Neymar in a two-minute period to prevent the visitors an instant response.

However, Barca were gifted a route back into the game 16 minutes from time when Sandro’s effort cannoned off Benoit Tremoulinas’s hand and the referee pointed to the spot.

Neymar had missed a penalty in Messi’s absence against Las Palmas last weekend, but finally managed to squeeze the ball past Rico to halve the deficit.

Sevilla had to withstand relentless pressure in the closing stages, but Sandro’s effort against the post from Suarez’s low cross was the closest Luis Enrique’s men came to salvaging a point.