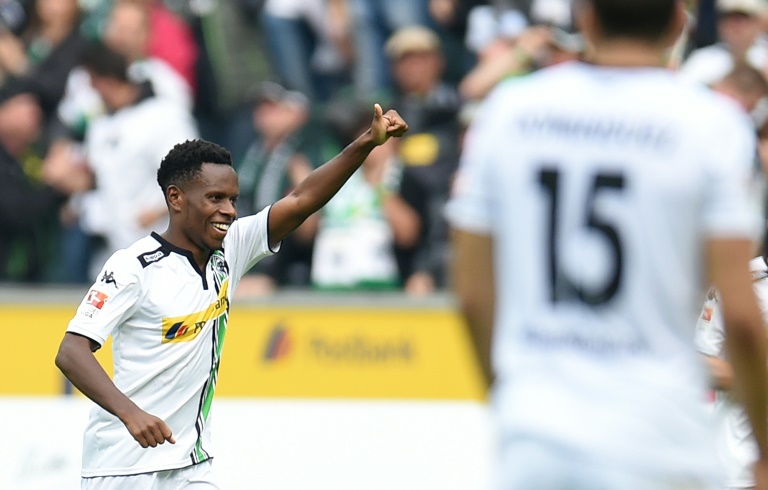 Borussia Moenchengladbach bounced back from their midweek Champions League defeat against Manchester City with two second half goals to sink Wolfsburg 2-0 in Bundesliga action on Saturday.

While the big guns in Germany’s top flight are not in action til Sunday, the pick of the ties was at Borussia-Park, where Norwegian Haavard Nordtvelt and French-born Guinean winger Ibrahima Traore did the damage against a Wolfsburg side who drop to seventh place.

The win lifts Moenchengladbach four points above the relegation zone as they win their third straight league match under caretaker coach Andre Schubert.

At the Olympic stadium in the capital, Hertha Berlin began brightly against Hamburg where Ivorian striker Salomon Kalou struck his third goal of the season to put the hosts 1-0 up after 17 minutes.

The 30-year-old, former Chelsea and Lille marksman has been a key addition since joining Pal Dardai’s side in 2014 and helped the club avoid relegation in his first season.

Bosnian international Vedad Ibisevic guaranteed maximum points for Hertha when he scored twice in two second-half minutes to make it 3-0 with 11 minutes remaining as the 1999-2000 Champions League qualifiers climbed to fourth spot.

Hoffenheim were the only other team to score in the opening 45 minutes of Bundesliga action as they rode a 33rd minute penalty into the break, against Stuttgart, thanks to German international winger Kevin Volland.

Second-from-bottom Stuttgart, at the start of the day, got back on level terms with 26 minutes to play thanks to 22-year-old Czech Republic striker Jan Kliment before Volland grabbed his second of the match to put the hosts into a 2-1 lead.

However with time running out, Stuttgart snatched a valuable point when Pirmin Schwegler scored in the 90th minute in a match that finished 2-2 but nonetheless left the visitors bottom of the league on goal-difference.

Hannover won their first match of the season as they defeated Werder Bremen 1-0 thanks to the only goal of the match on 56 minutes through French-born Senegalese international Salif Sane.

Finally, Ingolstadt defeated Eintrach Frankfurt 2-0 with late goals from Pascal Gross and Stefan Lex to take possession of fifth spot in their first season back in the Bundesliga.

The match of the weekend, takes place at the Allianz Arena on Sunday, when three-time defending champions Bayern Munich put their four point lead at the top, on the line against Borussia Dortmund, in a battle of unbeaten sides.

On Friday, Mainz evened their record at four wins and four defeats in a thrilling 3-2 victory at promoted Darmstadt.

Mainz are now sixth and in touch of the European places while Darmstadt suffer only their second defeat of the eight-game season and lie 10th.