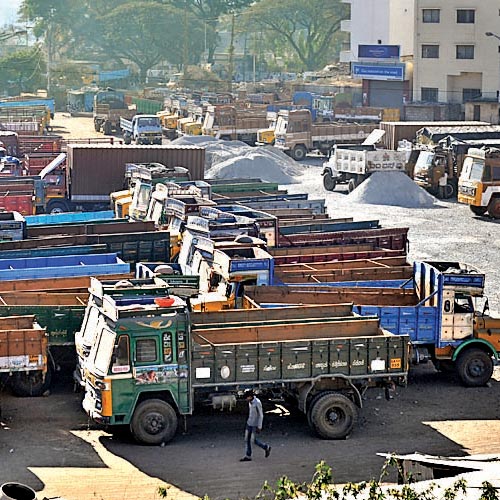 Transporters remained off roads for the second day today affecting supply of goods in various parts of the country, as the government refused to budge on their demand for scrapping the present toll system.

Supply of essential goods such as milk, vegetables and medicines have however been kept out of the purview of the indefinite strike, called by the apex transporters body, the All India Motor Transport Congress (AIMTC).

The impact was visible on supply of raw materials for various industries in Tamil Nadu, Rajasthan, Punjab, Haryana, Bihar and Uttar Pradesh, among other places.

“We will continue our strike till the government comes out with some practical solution to our problem. We are not against paying toll, but we are demanding it in an annualised form.

“The electronic-toll collection system as promised by the government is not practical,” AIMTC President Bhim Wadhwa said.

AIMTC claims to have 87 lakh trucks and 20 lakh buses and tempos across the country under its fold.

Another truckers body All India Transport Welfare Association (AITWA) has decided to keep away from the strike.

Wadhwa said the cumulative loss to the truckers during the first two days of the strike, which began yesterday at 6 am was estimated at about Rs 3,000 crore, while the loss to the government could be more than Rs 20,000 crore.

However, the government has refused to budge from its stance and said it cannot scrap the toll collection system.

“It is up to them to continue their strike.

Government cannot scrap toll. We have already assured to implement electronic tolling system pan-India by December. I appeal them to call off the strike,” Road Transport and Highways Minister Nitin Gadkari said yesterday.

AIMTC is demanding scrapping of the existing toll system, saying it is a tool of harassment, while it is seeking a one-time payment of taxes and simplification of TDS procedure.

On the other hand, Indian Foundation of Transport Research and Training (IFTRT) said AIMTC’s suggestion to have fixed annual toll was not rational.