Home World No deal yet as TPP talks strain on auto, farming and drugs 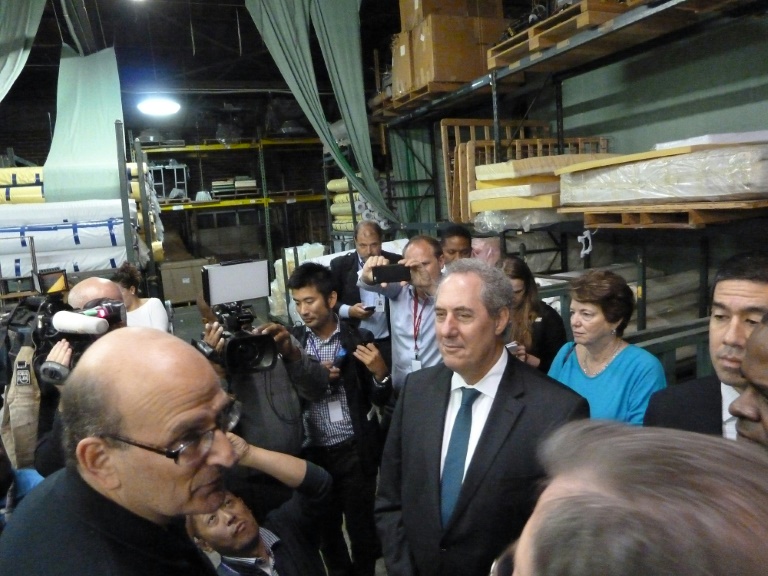 Talks on the ambitious Trans-Pacific Partnership appeared Thursday to remain stuck on a handful of tough issues including auto parts, the dairy products trade and drug protections.

Officials gave hints that the negotiations to form the world’s largest free-trade area with the United States, Japan and 10 other Pacific Rim countries could run past the Thursday night target, amid worries of yet another failure to finalize a deal.

US Trade Representative Michael Froman, the host and one of the key driving forces behind the TPP talks, gave no hint of where negotiations stood as he took time out to tour a small mattress factory in Atlanta, which he said would benefit from the pact.

“Through TPP we want to open more markets” for small businesses, he said.

He said the US is focused on creating “an open, rules-based trading system.”

But Australia’s Trade and Investment Minister Andrew Robb suggested to the Australian Financial Review that US determination to lengthen protections for patents of a promising class of drugs, biologics, was holding up other agreements, including on opening markets for dairy products from Australia and New Zealand, and sugar from Australia.

“I came to lower protection so I get frustrated if we are talking about increasing protection in the case of biologics or see no reduction in other areas,” Mr Robb told the newspaper in Atlanta. “Something has to give.”

Representatives of the 12 countries — Australia, Brunei, Canada, Chile, Japan, Malaysia, Mexico, New Zealand, Peru, Singapore, the United States and Vietnam — were huddled in intense negotiations in Atlanta, hoping to reach a final deal two months after failing to do so in top-level talks in Hawaii.

Major challenges in at least three areas remained, according to officials involved in the discussions.

– Opening up the US market for auto parts — an issue of key interest to Japan — against resistance from Mexico and Canada, who are already favored suppliers of parts to the US auto industry under the NAFTA trade treaty

– Opening up the Japanese, US and Canadian markets to rival dairy and processed dairy products from New Zealand and Australia, and opening the US market to sugar from Australia, Canada and elsewhere

– Granting eight year patent protection to increasingly important biologic drugs, amid concerns this will raise the costs of the drugs and leave them less accessible in poorer countries

The stakes were high for many, with farm and pharmaceutical industry lobbyists from various countries and civil society activists gathered at the same Atlanta hotel to defend their interests.

Negotiators face political pressures back home, with Canada in the middle of a national election and the United States preparing one next year.

A group of senior US legislators warned Washington’s negotiators to not give up US interests in pursuing a deal, with Congress’s support key to getting any final pact ratified.

“We urge you to take the time necessary to get the best deal possible for the United States, working closely with us and with stakeholders to resolve the many outstanding issues in these critically important negotiations,” they said in a letter to Froman and Treasury Secretary Jacob Lew.

Since initiating the talks in 2008, the United States has been hoping to lock in rules on free trade and intellectual property protection that global trade heavyweight China would eventually have to heed. China, however, has already begun trying to set up its own Asia trade agreement, which analysts worry could take concrete shape if TPP talks fail.

The negotiations have covered a range of issues, from governments’ protection of state-owned enterprises, to setting up extraterritorial tribunals to settle disputes between governments and foreign investors, to the use of capital controls in a country’s financial system.