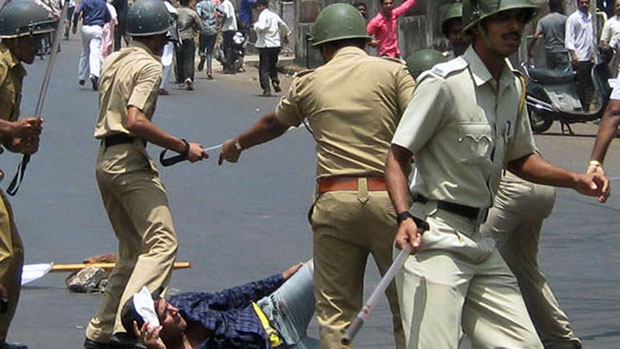 A man was allegedly beaten up by three policemen while he was having dinner outside his home in Sector-3 of Faridabad.

According to the eyewitnesses, the man was having dinner with his family, sitting outside his home in Sector-3 when three policemen landed there and started beating the man.

The victim, Prem, got his arm fractured due to the beating.

The police, however, have denied all the allegations.

Locals from Sector-3 area lodged a protest outside the police station Sector-7 in Faridabad demanding an immediate action against the erring police officials.

Yesterday, he reached home in 36Gaz colony of Sector-3 at night. Since there was no electricity in the area, the family started having dinner sitting outside their home, Prem said.

After some time three cops came and started beating him, he said.

He was taken to police post in Sector-3 and was further beaten. In the beating he got his arm fractured, he said.

Prem said that in spite of asking again and again the cops didn’t tell him, what his fault is and why he was being beaten.

Prakash, mother of the victim, said that while the family was having dinner, her son was nabbed by the cops and taken along with them beating him.

SHO Police Station Sector-7 Faridabad said that there is no truth in the case and actually Prem was among the three men who were creating nuisance after drinking alcohol.

The police tried to nab them and they tried to save themselves by running here and there.

In the process, Prem got his arm fractured, they said.

The family and the locals have decided to elevate the matter to higher authorities.