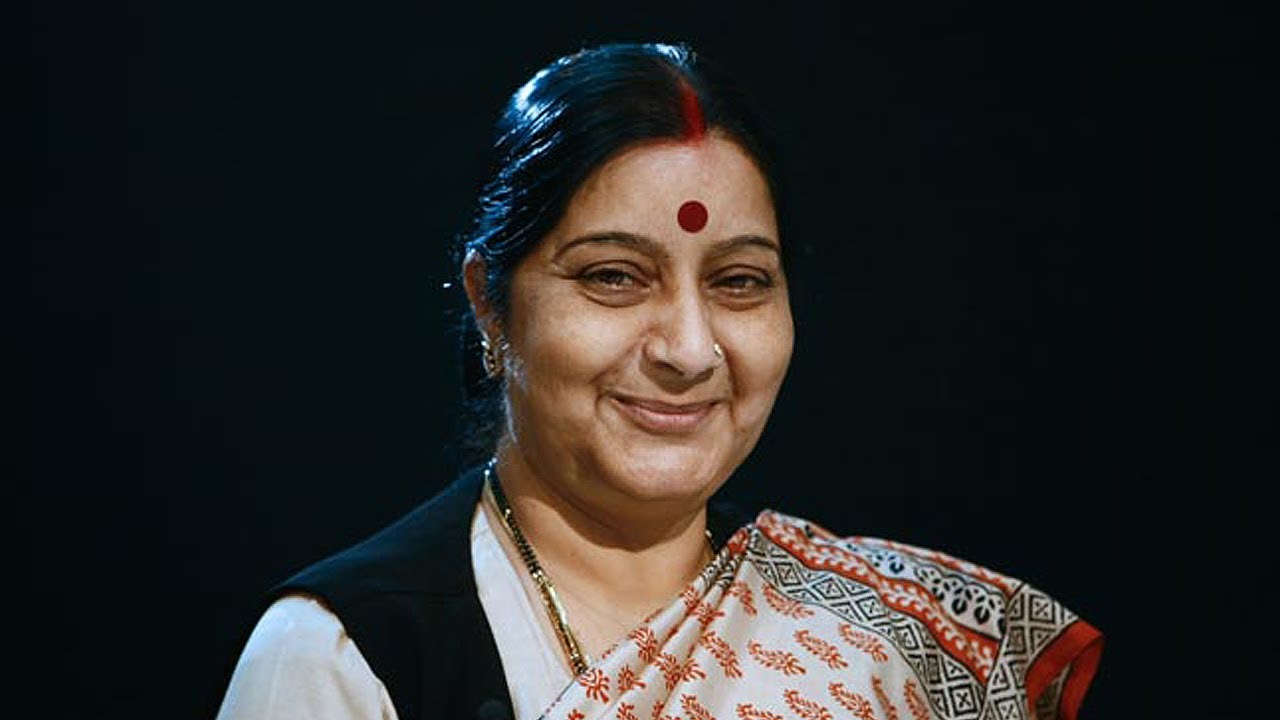 Least controversial, she is often considered the ideal Consensus Candidate for Prime Minister. Her grace, eloquence, and quick wit stand her in good stead, especially when the party needs her.

She is at home in the polished diplomatic world as well as in the rough and tumble of politics.

Sushma Swaraj was born on February 14, 1952 in Ambala to a Brahmin family in India. Her father was a prominent RSS member. She was a child prodigy known for her exceptional memory.

Educated at Sanatan Dharma College, she earned her Bachelor’s degree with majors in Sanskrit and Political Science.

She studied law at Punjab University, Chandigarh, and practised as a Supreme Court of India advocate from 1973.

Swaraj began her political career with Akhil Bharatiya Vidyarthi Parishad in the 1970s. She became a member of Haryana Legislative Assembly and a Cabinet Minister in Haryana at the age of 25 and held 7 portfolios.

She became State President of Janata Party (Haryana) in 1979.

She resigned from the Union Cabinet to take over as the first woman Chief Minister of Delhi in 1998.

She gained national recognition for the tough contest she gave Congress President Sonia Gandhi in Bellary. Though she lost, she was hailed for giving Sonia her toughest political challenge.

She resigned her Assembly seat to return to national politics and was Minister for I&B from 2000 to 2003 and Minister of Health & Family Welfare and Parliamentary Affairs from 2003 until 2004.

When Congress was set to form the government in 2004, Swaraj threatened to shave her head, don a white saree and eat groundnuts (symbollically mourning) if Sonia, the Italian-born Congress leader, became prime minister.

Swaraj was re-elected to the Rajya Sabha in 2006. She served as the Deputy Leader of BJP in Rajya Sabha till 2009.

She won the 2009 election in Madhya Pradesh and became Leader of Opposition in the 15th Lok Sabha.

Swaraj is married to Swaraj Kaushal, a senior advocate of Supreme Court of India. They have a daughter, Bansuri, who is a graduate from Oxford University and a Barrister at Law from Inner Temple.

She’s big on astrology and gemology. She colour codes her saris and her diet as per the planetary alignment and the stars.

In 1977, Swaraj became the youngest ever Cabinet Minister in the country at 25 years of age