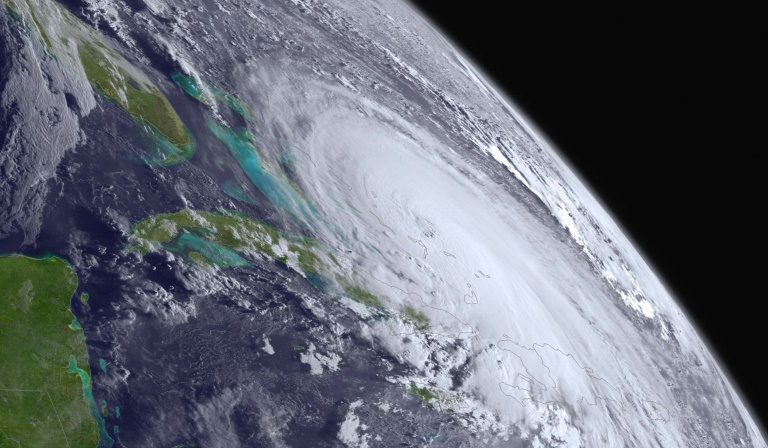 Joaquin, an “extremely dangerous” Category Four hurricane, lashed the central Bahamas with 130 mile (215 kilometer) per hour winds early Friday as jittery residents of the US east coast battened down, fearing they may be next.

Big and slow-moving, Joaquin was expected to be over the northwestern Bahamas later in the day Friday.

Classified as an “extremely dangerous” Category Four storm, Joaquin is capable of inflicting death and destruction with sustained winds clocked at 130 miles per hour, according to the hurricane center.

Hurricane force winds extended up to 50 miles (80 kilometers) from its center and tropical force winds up to 185 miles outward.

Classes were called off in the Bahamas, some flights were cancelled and cruise ships headed for the popular vacation destination were diverted elsewhere.

Cuban officials issued a tropical storm warning for much of the south-eastern part of the island, meaning that hurricane conditions are expected somewhere within the warning area.

On its current path, Joaquin was likely to cause coastal flooding in the US mid-Atlantic region, forecasters said.

Emergency preparations began as far north as New York, and officials in the Bahamas urged people to brace for up to 15 inches (37 centimeters) of rain.

US President Barack Obama was briefed on the preparations, the White House said.

Residents of the eastern US cleared grocery shelves of water, milk and other essentials before the storm’s arrival.

Since Joaquin is moving slowly “a catastrophic situation may unfold” in the Bahamas “with a prolonged period of intense hurricane conditions,” according to www.weather.com.

Torrential rains are likely in the Carolinas and Virginia, US media reported.

A dangerous and life-threatening storm surge will raise water levels by as much as 10 feet above normal tide levels in parts of the central Bahamas, the reports said.

The Bahamas are an island chain that at its most northern point sits off the coast of southern Florida.

In Virginia, which was already hit by flash flooding Tuesday, the governor declared a state of emergency to prepare for more rain even before Joaquin arrives. Authorities in New Jersey did the same.

“The forecast of up to 10 inches of rain in areas across Virginia could result in floods, power outages and a serious threat to life and property,” Governor Terry McAuliffe said.

In Virginia, the Norfolk Naval Station, the biggest US naval base, was warned that the storm could bring destructive winds.

Local NBC affiliate WAVY reported that ships were told to be prepared to get underway within 48 hours if necessary.

Joaquin is the third hurricane of the 2015 Atlantic season, which began in June and ends in November. Peak activity usually occurs in September.

The most destructive weather pattern so far this year was Tropical Storm Erika, which killed around 30 people and caused extensive damage in August on the small Caribbean island of Dominica.

The National Oceanographic and Atmospheric Administration had predicted a less active hurricane season than usual because of the El Nino phenomenon, which inhibits storm formation.