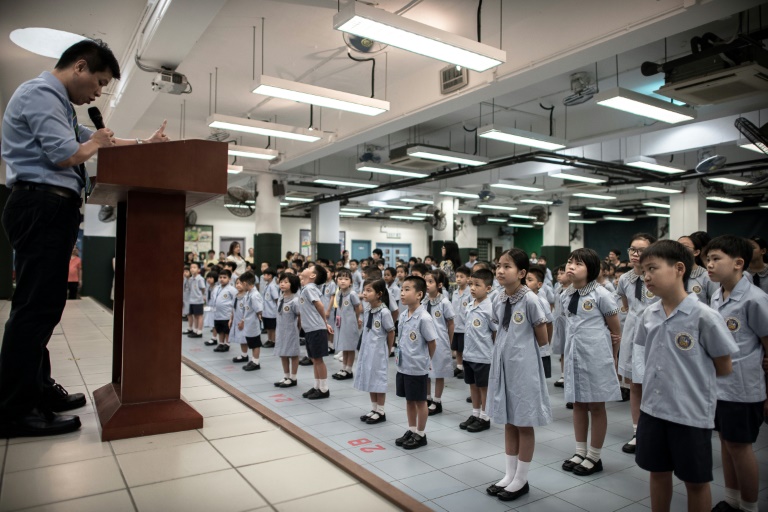 Pro-democracy protesters have retreated from the streets of Hong Kong but education is increasingly becoming a political battleground as students and teachers say academic freedoms are under threat.

China’s central government and the Hong Kong authorities were unswayed by last year’s pro-democracy rallies — sparked when Beijing insisted on vetting candidates before a public vote on the city’s next leader.

Activists have since been prosecuted for their involvement in the protests, and many teachers feel the spotlight is now on them.

Educators say there is increasing self-censorship as staff worry about losing their jobs.

“Teachers are on alert,” says one secondary school teacher who gave her name as Siu siu.

“If an important topic is sensitive, they will think about whether or not it is a must,” says Siu, 28, who teaches liberal studies, covering politics, social issues and current affairs.

Some political questions on liberal studies exam papers have gone from mandatory to optional, Siu says, with teachers concerned the subject is being watered down.

Siu says teachers felt targeted during the democracy protests, which became known as the Umbrella Movement.

The education bureau warned them against participating and a hotline was set up by pro-Beijing activists where callers could report names of those taking part.

It has left a residual paranoia, says Siu.

“We don’t know whether some teachers were blacklisted,” she says.

“Maybe there could be future attacks.”

It is not the first time there have been concerns over academic freedom in Hong Kong.

Tens of thousands marched against “national education” in 2012, a government proposal to bring Beijing-centric patriotic teaching into schools.

That plan was dropped, but some feel the authorities are closing in once more.

She was caught by television cameras during a rally outside the city’s legislative council building, where some protesters tried to break in.

Hui, in her 40s, says she was not involved in the attempted break-in and has never faced any charges over her participation in the protests.

“In November (2014), the principal told me the Chinese Liaison Office (Beijing’s representative office in Hong Kong) had asked the school’s board of directors to command her to ask me to leave,” Hui told AFP.

Hui says she was told her contract would not be renewed, despite a good relationship with the principal.

Her contract ran until the following August, but she left voluntarily in April.

“In Hong Kong the school system is always bound to the political structure. You can talk about things that are good about the government, but you can’t talk about the negative aspects,” Hui added.

Principal Fung Shui-lan refused to comment when contacted by AFP.

Student leader Joshua Wong, 18, who spearheaded both the 2012 national education rally and last year’s protests, told AFP: “The principal or the school may put pressure on a lot of the teachers and students who support universal suffrage.”

Some council members are appointed by the city’s unpopular leader, Leung Chun-ying, who activists claim is manipulating the university’s autonomy.

Officials had delayed their decision on the appointment, prompting more than 1,000 academics from the city’s universities to sign a letter to the government, calling it a “worrying sign of political intervention”.

“It creates a warning to all academics in Hong Kong that should they fight for democracy or the rule of law, even if they are not radicals… they can be punished,” political commentator and university professor Dixon Sing told AFP.

Hong Kong’s education bureau says academic freedom is enshrined in the city’s constitution and is “an important social value treasured by Hong Kong”.

In an emailed response to AFP, it said warnings to teachers against participating in protests were a “friendly reminder” and argued there had never been compulsory materials for liberal studies.

Once a British colony Hong Kong was handed back to China in 1997 and is allowed far greater civil liberties than those enjoyed on the Chinese mainland.

But the city remains divided over its political future, split between those pushing for democracy and those who are loyal to the mainland.

Education is a natural arena for those tensions to play out, says Sonny Lo, a social sciences professor at the Hong Kong Institute of Education.

“Educational developments have been highly politicised by the external environment, whether in 2012, or by the Umbrella Movement in 2014,” says Lo.

“Issues like what has happened at HKU… perhaps characterise the politicisation and polarisation of Hong Kong in the past several years.”

Analysts agree the battle is set to continue.

“They (the government) have always tried to change education, but it has been relatively difficult because of the resistance of education professionals,” political analyst Ma Ngok said.

“I think that’s always been there because Hong Kong has never been a democracy.”