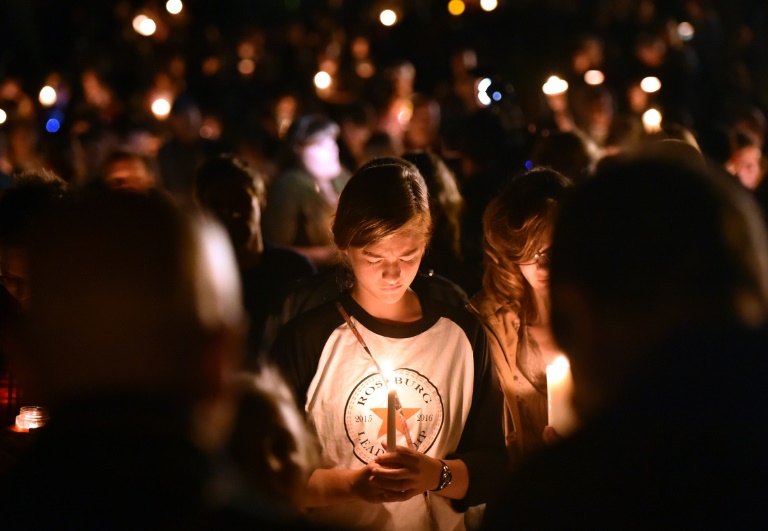 A visibly angry President Barack Obama has made an impassioned plea for gun control after a shooting at an Oregon college left 10 dead and seven wounded, saying such tragedies had become “routine”.

In the close-knit community of Roseburg, large crowds turned out for a candlelight vigil for the victims of Thursday’s killing spree at Umpqua Community College, which ended with the assailant dying during a shootout with police.

“Somehow this has become routine,” Obama said of the attack, as he blasted Congress for its failure to act in the face of such killings.

“We’ve become numb to this… It cannot be this easy for somebody who wants to inflict harm on other people to get his or her hands on a gun.”

“Prayers are not enough,” the stony-faced president said. “We can actually do something about it, but we’re going to have to change our laws.”

Witnesses described scenes of terror and panic as the tragedy unfolded at the school, located in a picturesque rural region of Oregon.

The gunman — identified by US media as 26-year-old Chris Harper Mercer — opened fire in a classroom, then moved to other rooms, methodically gunning down his victims.

One man whose daughter was wounded told CNN that the gunman, who did not attend the school, ordered students to identify themselves if they were Christian and then shot them.

“They would stand up and he said ‘Good, because you’re a Christian, you’re going to see God in just about one second’,” Stacy Boylan told CNN, relaying his daughter Ana’s account.

He said his daughter, who survived by playing dead, told him the shooter burst into the classroom and first shot the professor point blank.

As the community struggled for answers, the gunman’s motives — whether religious hatred or a desire for notoriety — remained unknown. It is not known whether he had a history of mental illness.

Neighbors described Mercer as a withdrawn, anxious young man who lived with his mother.

They told the New York Times he wore the same outfit every day — combat boots, green army pants and a white T-shirt.

“He was not a friendly type of guy,” Bronte Hart, who lived in the apartment below Mercer’s in Winchester, Oregon, told the newspaper. “He did not want anything to do with anyone.”

At the candlelight vigil, families prayed, consoled one another and held their children tight in the chill night air.

They brought flowers and made signs and arranged candles to form the letters UCC, the college’s initials.

The college draws 3,300 students from surrounding communities, so the loss was close to home for many in Roseburg.

“So something like this affects many, many, many people.”

Cassandra Welding, a student at Umpqua, said she heard 35 to 40 shots coming from an adjacent classroom and saw a fellow student get shot as she opened the door to check on the noise.

“Then we locked the doors, turned off the lights and … we were all pretty much in panic mode and called 911 and our parents and (said) ‘I love yous’ because we didn’t know what would happen, if those were our last words.”

Brady Winder, another student at Umpqua, said he was in class when suddenly he heard a loud pop coming from an adjoining classroom.

He said his teacher called out through the door to see if everything was OK and then further shots rang out.

“We all kind of froze and bolted out the door,” Winder said. “I didn’t really have any time to think. It was fight or flight.”

County Sheriff Hanlin said police were alerted to the shooting at 10:38 am and rushed to the site where two officers cornered the gunman and exchanged fire with him. He was later confirmed dead.

“You will never hear me mention his name,” Hanlin said of the shooter. “I will not give him the credit he probably sought prior to this horrific and cowardly act.”

Authorities said investigators were examining social media postings thought to belong to the shooter. Several reports said he may have shared his intentions online beforehand.

Other reports said police recovered three handguns and an assault rifle at the scene along with a cell phone that presumably belonged to the shooter, who wore a bullet proof vest.

School shootings are a disturbing reality of American life and many facilities have reinforced security in recent years, especially in the wake of the Sandy Hook massacre in 2012 that left 20 students and six adults dead.

There have been 142 school shootings in the United States since that tragedy, according to data compiled by Mass Shooting Tracker.