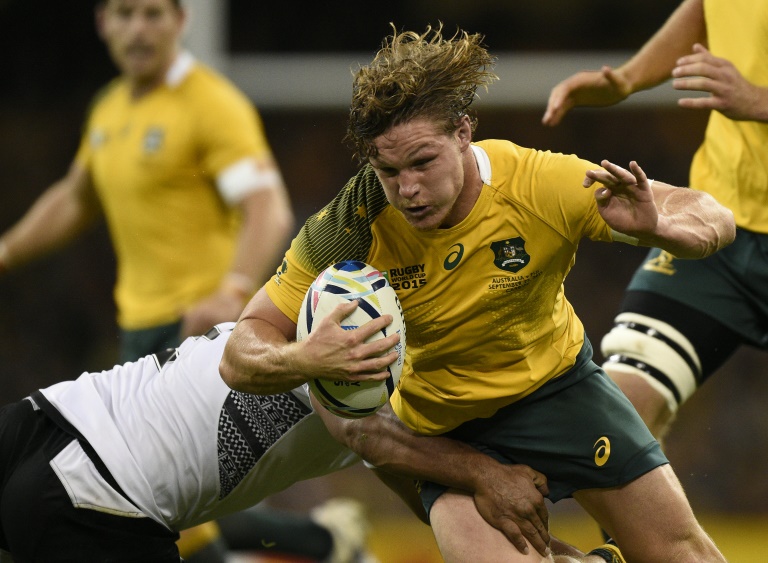 Australia coach Michael Cheika kept faith with his hard men Michael Hooper and David Pocock to break down England’s resistance in their “Pool of Death” World Cup clash on Saturday.

Cheika on Thursday named the same team that beat Fiji 28-13 in Australia’s opening game for the Twickenham battle. He turned out a virtual reserve team for the following 65-3 Pool A hammering of Uruguay.

An Australia victory would almost certainly knock hosts England out of the competition. And Cheika is again counting on the power of back-rowers Hooper and Pocock in the loose — which the Australians see as a key England weakness.

“We’ve been working hard each day this week to improve our game before we play England on Saturday,” said Cheika.

“The group is really committed to making all Australians truly proud of how we represent them at this Rugby World Cup and Saturday night will be another opportunity for us to do that.”

Hooper, who in 2014 was briefly captain of the Wallabies even though he was just 22, said Cheika’s belief in him and Pocock played a large part in them being so effective in their two games together.

“I think as ‘Cheik’ said he believes in us 201 per cent so he wants you to play your own game,” he said.

“He wants you to use your skills, and heâ€™s been empowering us with that ever since heâ€™s been in the job.

“The focus is on us because we know we can control the outcome at the end of the day.”

“No, weâ€™re walking out there nil-all at the weekend,” said Hooper. “Itâ€™s a knockout game no matter what anyone has said itâ€™s an important game.”

Zimbabwe-born Pocock, who has performed wonders to still be fighting fit after two serious knee injuries, said he hoped he wouldn’t let down both of his countries.

“I want to make Australians and the millions of Zimbabweans around the world proud of my performance on Saturday,” said the 27-year-old.

A Wales win over Fiji on Thursday and Australia victory at Twickenham would dump England out of the World Cup in the first round — the worst performance by a host nation.

Cheika said this week that “every game is a World Cup final” in a sign of how seriously the Wallabies are treating the clash against their old rivals.

England have won the last two clashes over Australia and lead their World Cup record with three victories to two — including the famous 20-17 win in the 2003 World Cup final when Jonny Wilkinson drop goal in the final seconds of extra-time secured the trophy.

In the war of nerves ahead of Twickenham, Australian playmaker Matt Giteau said Wilkinson was refusing to take his calls this week seeking advice.

Giteau said he has been speaking to his former Toulon teammate in recent months on the best way to win the World Cup.

“He won’t answer my calls this week, and I’ve tried him a lot,” said Giteau.

“He won’t answer me this week, maybe next week.”

The 33-year-old Giteau has not been part of Australia’s plans since he moved to Toulon after he was controversially left out of the 2011 World Cup squad.

But Cheika forced a change of policy so that foreign-based players could be in the team.

Giteau watched the last game between the two sides — a 26-17 victory for the English last November — from a box at Twickenham.

“When I was having a few beers, it never crossed my mind that they might relax the rules. The rules were in place as they were, so at that point it was just really we had a break from Toulon.

“I’m massively more appreciative of it all now that I’m back with Australia. I suppose I am more grateful than I was,” said Giteau.

Cheika said that team replacements would be named after training on Thursday.

Replacements: to be named