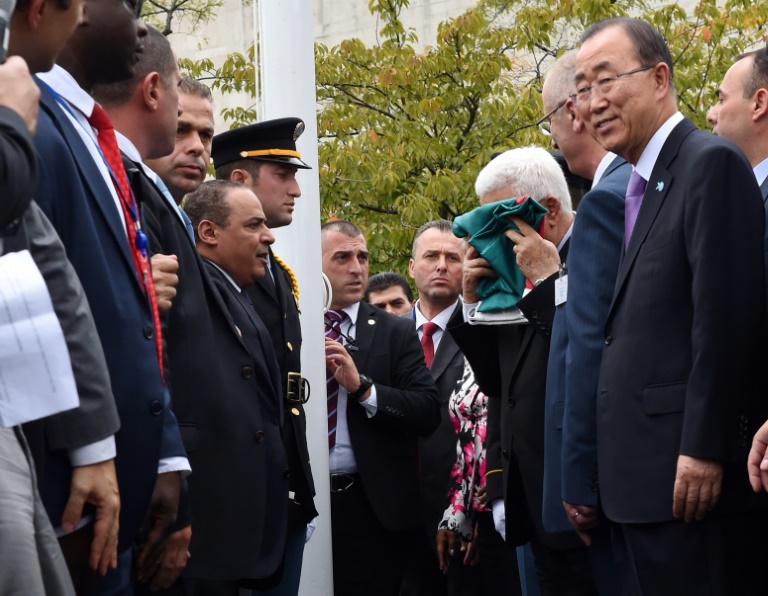 The Palestinians raised their flag at the United Nations on Wednesday for the first time as president Mahmud Abbas called on the world body to grant them full membership.

UN Secretary-General Ban Ki-moon and Abbas presided over the packed ceremony in the rose garden after the Palestinian leader launched a searing attack at the General Assembly on Israel’s continued occupation.

“In this historical moment, I say to my people everywhere: raise the flag of Palestinians very high because it is the symbol of our identity,” the 80-year-old Abbas told the crowd. “It is a proud day.”

Israel and the United States have dismissed the move as a symbolic gesture that would not serve the cause of peace. But Ban said symbols were “important” and could lead to action.

“Now is the time to restore confidence by both Israelis and Palestinians for a peaceful settlement and, at last, the realization of two states for two peoples,” he said.

The red, black, white and green Palestinian flag was then hoisted under dark clouds that threatened rain. The crowd broke out into cheers when it started to flutter in the gentle breeze.

Dozens of people gathered in the West Bank town of Ramallah to watch the flag-raising by TV link. When the small crowd saw Abbas on the screen, they stood cheering and then fell silent to hear him.

The General Assembly voted September 10 to allow the flags of Palestine and the Vatican — both have observer status — to be raised at the world body alongside those of member states.

The resolution was backed by 119 countries, with 45 abstentions and eight votes against, including Australia, Israel and the United States.

Abbas used his speech Wednesday at the General Assembly to appeal for “those countries that have not yet recognized the state of Palestine yet, to do so.”

“Palestine, which is an observer state in the United Nations, deserves full recognition and full membership,” he said.

Clashes in recent weeks between Israeli police and Palestinians at the sensitive Al-Aqsa mosque compound in Jerusalem have raised tensions and prompted Abbas to warn of the risk of a third intifada, or uprising.

“I call on the Israeli government to cease its use of brutal force… particularly its actions at the Al-Aqsa mosque,” Abbas told the Assembly.

“Such actions will convert the conflict from a political one to a religious one, thus creating a explosive situation in Jerusalem and the remaining Palestinian occupied territory.”

A recent poll found that Palestinians are increasingly exasperated with his leadership and Israel’s right-wing government.

A majority favor a return to armed uprising in the absence of peace talks and two-thirds want Abbas to resign.

In the runup to the speech, there have been reports that Abbas would use the opportunity to drop a “bombshell.”

Suggestions of what that could mean have included a complete withdrawal from the Oslo accords of the 1990s or the dissolution of the Palestinian Authority that those agreements created.

While such an announcement could potentially have a major impact, many analysts questioned whether Abbas would truly press ahead with it.

– Cannot be bound by agreements –

Instead, he told the UN that Israel’s refusal to commit to past agreements and release Palestinian prisoners, and continued Jewish settlement activity in the West Bank and east Jerusalem, were sapping Palestinian hopes of ever achieving an independent state.

“They leave us no choice but to insist that we will not remain the only ones committed to the implementation of these agreements, while Israel continuously violates them,” he said.

“We cannot continue to be bound by these signed agreements with Israel and Israel must assume fully all its responsibilities as an occupying power.”

Abbas said Palestinian patience “has come to an end” and described the current situation as “unsustainable.”

Later on Wednesday, the UN chief will also chair talks with the Diplomatic Quartet seeking a political settlement to the conflict.

The peace process has been in the doldrums since the latest US diplomatic effort failed in April last year.

In a shift, Egypt, Jordan, Saudi Arabia and the Arab League have been invited to the meeting, along with the foreign ministers of Russia, the United States and EU foreign affairs chief Federica Mogherini.

Israeli Prime Minister Benjamin Netanyahu will address the United Nations on Thursday and call on Palestinians to stop “incitement to violence.”