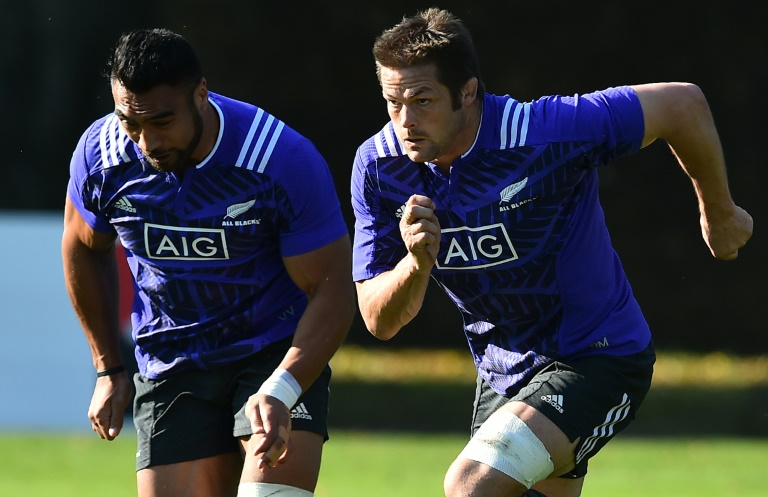 The All Blacks have sent an ominous warning to Georgia ahead of their Pool C match on Friday saying they want to make an emphatic statement about their goal of becoming the first side to win consecutive World Cups.

It is not good news for the Georgians who are resting several senior players from their last outing when they were hammered 54-9 by Argentina.

All Blacks captain Richie McCaw said his concern is to ensure his side moves up several gears after less than complete performances in their opening games, victories over Argentina and largely part-timers Namibia.

“This is the time we need to do that. We’ve all had a run in the first two games so there’s no excuses for not being ready to go,” he said Thursday on the eve of their Pool C match at Millennium Stadium.

The All Blacks, who have been at the head of the world rankings for the past six years, are set on becoming the first side to win back-to-back World Cups as a central motivation for this tournament.

They have named their top available side to play Georgia who elected to hold back key players, with the notable exception of captain Mamuka Gorgodze, to keep them fresh for their Namibia clash five days later.

A win over Namibia, after earlier beating Tonga, will give Georgia a good shot at finishing third in the pool and for the first time automatically qualifying for the next World Cup.

But the All Blacks have a much higher goal and McCaw said the standard of the opposition should not derail them.

“There’s been a bit of an edge this week in making sure we get the things we perhaps were a little bit off in the first couple of games. If we get them right, hopefully, we will get a good performance,” he said.

“Against Namibia, the guys were trying hard but were making some crucial mistakes that going forward we can’t afford to let happen.”

McCaw was not concerned that Georgia were not putting up their best side.

“We’ve had a bit of a look at them but a lot of the focus has been about making sure we get our game spot on because it needs to go up a level,” he said.

“The Georgians are pretty big men and they love the contact area and that’s the key to winning Test matches really, getting that right at the breakdown or when you’re carrying the ball or defensively.

“It was okay against Namibia but it’s got to be a step up and the Georgians will challenge that I’m sure.”

They have been physical and at a price, with Ma’a Nonu injuring a shoulder in a bone-jarring tackle in Sunday’s training which has sidelined him for the Georgia game.

Dan Carter’s fly-half understudies Beauden Barrett (whiplash) and Colin Slade (hamstring) are also out injured as is loose forward Liam Messam (calf) but all are expected to be available to play their final pool match against Tonga next week.

But injuries from friendly fire in full contact training are what the All Blacks expected, and Foster said nothing would stop them doing everything possible to lift their game.

“It’s time for us to keep improving. We’ve got two more pool games and we’ve got to make sure we lift our performance in each one of those.

“We’ve tweaked a couple of things for this game. There’s reason for that. But overall our attitude is to pick a very very strong team and keep building to get ready for what’s to come.”