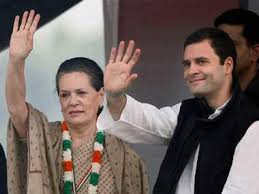 With the Congress-RJD-JD(U) ‘grand alliance’ facing a tough challenge in Bihar, Congress President Sonia Gandhi and Vice President Rahul Gandhi will address a series of rallies in the state next month ahead of the crucial five-phase assembly elections.
Sonia and Rahul are scheduled to address nine and four rallies, respectively. While Sonia is slated to address rallies on October 3 and October 17, Rahul will be holding public meetings on October 7, 26 and 30.

Congress sources said that both RJD chief Lalu Prasad and Bihar Chief Minister Nitish Kumar are likely to share the dais with Sonia and Rahul in one or more of their rallies during the fortnight-long campaign programme, which starts with the Congress President’s rally at Kahalgaon in Bhagalpur and Wajirganj in Gaya on October 3.

Rahul is scheduled to address three rallies in Begusarai, Sheikhpura and Sasraam on October 7.

While Sonia had already shared dais with Nitish and Lalu at the Swabhiman Rally in Patna on August 30, Rahul is yet to address any joint rally with the Bihar leaders. Rahul kicked off his election campaign from Champaran on September 19, sharing the dais with Prasad’s son Tejaswi Yadav and JD (U) general secretary K C Tyagi.

The BJP in alliance with Ram Vilas Paswan’s LJP, Upendar Kushwaha’s RLSP and former Chief Minister Jitan Ram Manjhi’s HAM is making a serious bid to wrest power from two-term Chief Minister Nitish Kumar, who has allied with his one time friend-turned-foe-turned-friend, Lalu Prasad and Congress to halt the juggernaut of Modi-led BJP, which had virtually decimated them in Bihar in last Lok Sabha polls.

After the Delhi drubbing, Bihar is a make or break election for BJP while the political future of both Prasad and Kumar also hinge on the electoral fallout in this crucial poll.