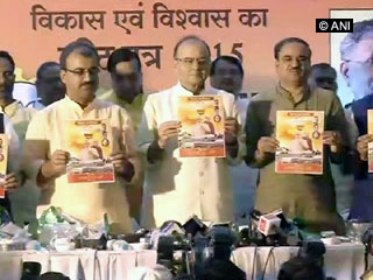 The party’s main plank is “development in Bihar”, he said.

The vision focuses of skill development of farmers and ensures to set them free of debts. During the event Arun Jaitley said that this vision document is a charter of development in Bihar and that the document has schemes for Dalit and Mahadalit as well. He said party wants to drag the state out of backwardness.

Citing BJP’s development credentials, Jaitley said “Madhya Pradesh was among BIMARU states – there were no roads, no electricity. But we changed it in 15 years.”