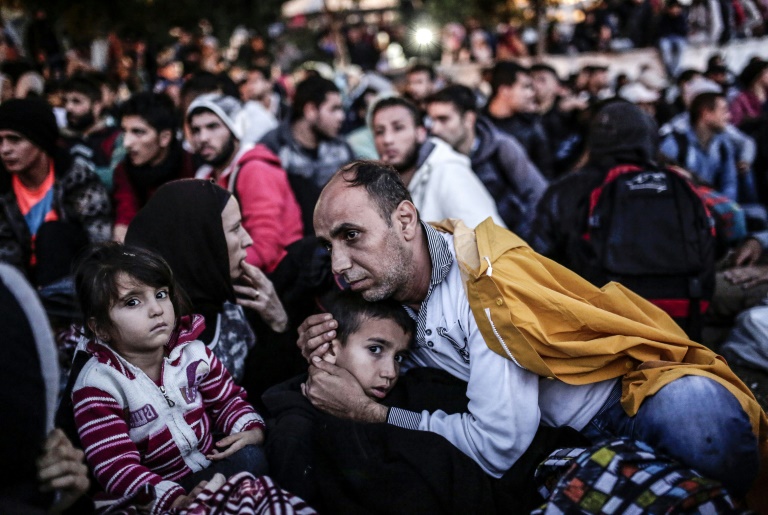 In the Istanbul district of Esenyurt, during the Muslim holiday of Eid, a skinny Syrian boy counted his friends on his fingers.

“Vedat… Serkan… Sefa… Emre,” Mohammed said, listing off the Turkish names with pride during a visit to the local Syrian-owned cafe and butchery with his father.

The pint-sized eight-year-old, who picked up Turkish playing on the street, acts as translator for his Arabic-speaking parents and six-year-old brother, who still struggle with the local language two years after fleeing the war across the border.

But like most of the over one million Syrian children living in Turkey, his integration is far from complete.

“I like Turkey because in Syria there was a war. Here, I feel safe. But I’ve never been to school. I’d love to go to school!” he said, smiling shyly.

As European leaders continue to slug it out over how to absorb the tide of refugees streaming into the continent, Syrians in the country that has borne the biggest load are weighing their options for the future.

“When the war is over we’ll return to Syria. Getting to Europe is too difficult,” Mohammed’s father Hussein said, with a protective hand on the shoulder of his firstborn.

But the future no longer features Turkey for many of the country’s over two million Syrian refugees, for whom life is a grind on pittance black market wages.

That’s for those who find work, and when the bosses pay up.

Like many children his age in Esenyurt, which supplies labour for local clothing, shoe and make up factories, Halil, 15, went out to work to help support his family.

But after two months sewing shoes, he quit after his boss refused to hand over his 1,250 Turkish lira (364 euros, $410 dollars) in earnings.

“I couldn’t report him to the police because I don’t have a resident’s permit,” Halil explained as he waited at the cafe counter for soup and flatbread.

“Here’s it is like at home. It’s war! The Turks don’t want us,” an older man interjects.

After months or years as “guests” in Turkey, with no right to work and limited access to basic services, more and more Syrians feel that way.

The growing indifference of ordinary Turks to the plight of the refugees is plain to see on Istanbul’s bustling Istiklal Caddesi high street.

Shoppers mill past without so much as a glance at a young Syrian boy lying curled up in a ball at the entrance to a clothing store, a plastic tray for coins at his elbow.

– Between sea and hard place –

A few hundred metres (yards) away, an eight-year-old with cherubic features knitted in a frown clings tightly to his older brother who is walking up and down hawking paper hankies.

The pair work to supplement the around 600 liras their father makes selling scrap metal, which just about covers their rent of 400 liras in a prefab.

Little Mokhtar’s fist is wrapped tightly around a banknote handed over by a customer. “The money’s safer with him,” says 18-year-old Mohammed, lifting up his T-shirt to show the stab wounds he sustained to the chest when thugs tried to rob him.

Frustrated at being treated like second-class citizens, many of those who had been just biding their time in Turkey while waiting for the war to end are now saving to pay a smuggler to ferry them across the Mediterranean to Europe.

“Syrian families want what families the world over want. They want to live in security, have work that allows them to provide for their children, send them to school, receive healthcare and give them a future,” Philippe Duamelle, UNICEF’s representative in Turkey told AFP.

Improving refugees’ access to education in Turkey has become a top priority of the Ankara government and European countries anxious to hold back the tide of migrants landing on their shores.

Of the 600,000 Syrian children of schoolgoing age in Turkey only about a third are attending classes.

Parents cite a host of obstacles in enrolling their children in school, including the difficulties involved in obtaining the resident’s permit often demanded for a seat on a school bench.

Mohammed, the eight-year-old in Esenyurt, hopes to soon be learning his ABCs. When he grows up, he says, he want to be a tailor, like his dad.

“Not a tailor! I want you to be a doctor or a lawyer,” Hussein says, gently chiding him.

Duamelle warns the failure of the children to fulfil their potential would be “disastrous”.

“The risk today for the international community,” he warns, “is to see a lost generation of Syrian children, which would be absolutely dreadful and would have disastrous consequences not just for the children themselves but for Syria, the Middle East and beyond.”