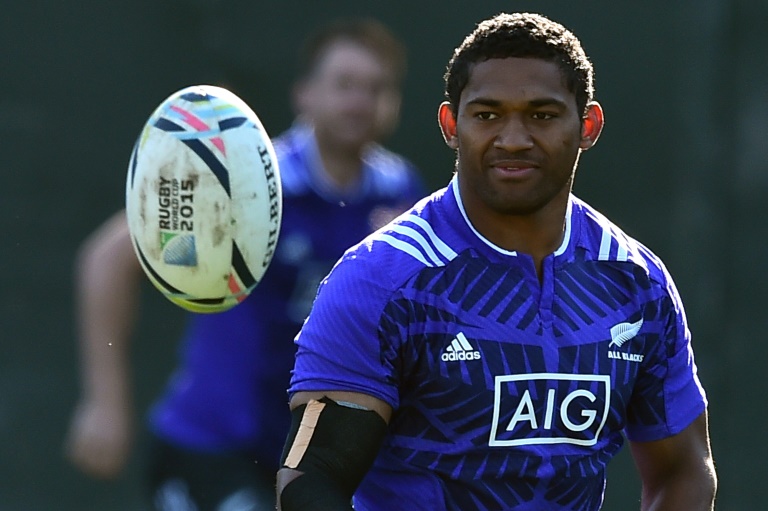 Ten weeks after suffering a broken leg in his debut Test, traditional Fijian medicine has brought All Blacks try ace Waisake Naholo back and ready to confront Georgia in the World Cup on Friday.

One day after the All Blacks beat Argentina in Christchurch in July, grim-faced coach Steve Hansen revealed Naholo had a fracture that had ended his World Cup chances. But Hansen was all smiles Wednesday when naming his “best 23” to play Namibia.

Naholo was named alongside Richie McCaw, Dan Carter, Kieran Read and a host of other senior All Blacks who did not start in the 58-14 romp over Namibia.

Georgia should pose no more difficult a challenge, but Hansen has decided it is time his defending champions started to bed-in their top side.

But the main talking point was the selection of Naholo who was selected for the World Cup when not fully fit but who Hansen always said would be his attacking weapon.

“It’s exciting for us to have him back,” he said of this year’s top try scorer in Super rugby.

“There’s been a lot of talk about a miracle cure but he’s comeback when we expected him to come back.”

After Naholo was told by New Zealand doctors the stress fracture would not heal in time for the World Cup he went to Fiji for a traditional treatment with an application made from a special leaf applied to the leg.

At a media conference where the team to play Georgia was named, Hansen shut down questioning about a “miracle cure” for Naholo.

Scrum-half Aaron Smith, a teammate of Naholo at Otago Highlanders, said the big wing was raring to get back on the field.

“He’s been getting killed in the gym, seeing the big guy sweat a bit. But you could see the relief when he got named and how excited he is,” Smith said.

“I’m just an excited fan of watching the guy run.

“Guys like that when they get the ball you get excited and try to catch up if you can. I gee him up a bit. give a bit of banter like ‘you can’t run over him or around him’ and you can see him try and prove me wrong.”

Julian Savea starts on the other wing for his third consecutive match and Ben Smith returns at fullback to give the All Blacks a potent backline.

Williams, a standout performer in the All Blacks opening wins against Argentina and Namibia comes in for Nonu who is one of four players not considered because of injury.

Liam Messam is still recovering from a calf injury while fly-halves Colin Slade (hamstring) and Beauden Barrett (whiplash) are expected to be fit by next week.

Usual scrum-half TJ Perenara, a former New Zealand Schools fly-half will be Carter’s back up at number 10 and will also kick if required.

The new look in the forwards sees role reversals with Charlie Faumuina and Wyatt Crockett while Owen Franks and Tony Woodcock warm the bench.

Hansen described the swith as “a reflection on what Wyatt and Charlie have been doing. Both of them have been playing really well and we now want to see them start a game and see how it goes.