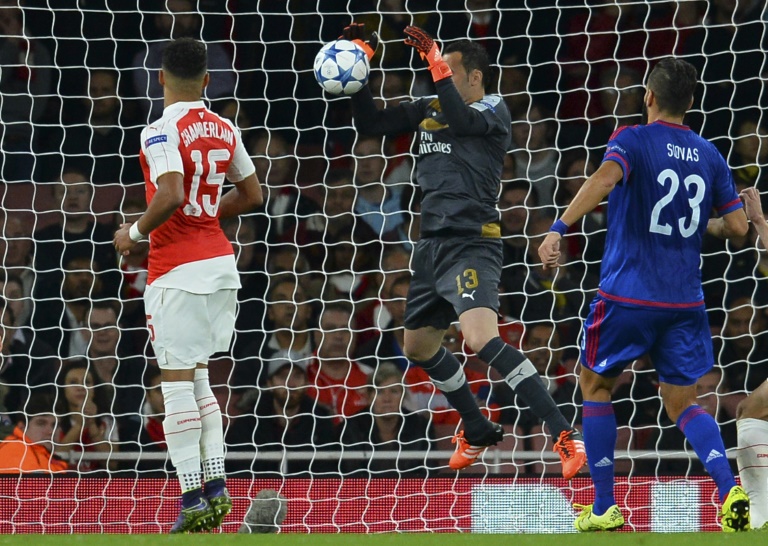 Arsenal’s Champions League campaign was plunged into crisis as a horrendous mistake from goalkeeper David Ospina helped Olympiakos claim a stunning 3-2 win at the Emirates Stadium on Tuesday.

Arsene Wenger’s side paid the price for an error-strewn display that condemned them to a second successive Group F defeat and could ruin their hopes of qualifying for the last 16.

After falling behind to Felipe Pardo’s deflected opener, Arsenal equalised through Theo Walcott.

But Wenger’s surprise decision to select Ospina instead of regular first choice Petr Cech backfired in spectacular fashion late in the first half when the Colombian allowed a Kostas Fortounis corner to slip through his grasp for an embarrassing own goal.

Alexis Sanchez dragged Arsenal back into it with a second half equaliser, but incredibly the north Londoners imploded again with more slack defending gifting Iceland striker Alfred Finnbogason the winner.

Beaten on all 12 visits of their previous visits to England, Olympiakos had caused one of the great European upsets and Arsenal, who face group leaders Bayern Munich in their next two Champions League fixtures, are in severe danger of being eliminated from the tournament by early November.

After losing their opening group game at Dinamo Zagreb, Wenger acknowledged there was no more margin for error.

Yet he still made five changes from Saturday’s win over Leicester, including the gamble on Ospina that would prove so costly.

Alex Oxlade-Chamberlain almost made an immediate impact as he fired into the side-netting, while Walcott wasted a good opportunity when he shot tamely at Olympiakos goalkeeper Roberto.

After that spritely start, Wenger’s side lost their rhythm and it wasn’t long before their always-fragile defence began to creak.

Centre-backs Laurent Koscielny and Gabriel made a hash of dealing with a routine cross, leading to a Fortounis shot that deflected over.

And from the resulting corner, Olympiakos took a 32nd minute lead as Arsenal’s lack of concentration was punished.

When the set-piece was pulled back to Pardo on the edge of the area, the winger was left with enough time and space to unload a powerful effort that hit Oxlade-Chamberlain’s heel and deflected past Ospina.

Arsenal’s response was instant and emphatic and they drew level three minutes later.

Sanchez slalomed away from two defenders and slipped a clever pass towards Walcott, who kept his composure from a tight angle to guide home a first-time finish that Roberto should have done better with.

Yet Arsenal’s relief was short-lived, with Olympiakos regaining the lead in comical fashion in the 40th minute.

There shouldn’t have been any cause for alarm when a Fortounis corner drifted harmlessly towards Ospina but, under no pressure, the keeper let it drop through his hands as though he was handling a grenade and the extra official behind the goal ruled it had gone over the line before he could recover.

There was more urgency about Arsenal in the second half and Per Mertesacker saw his powerful shot saved by Roberto, with Santi Cazorla’s goalbound strike from the rebound bravely headed off the line by Omar Elabdellaoui.

Cazorla was denied once more, this time by a good stop from Roberto, and Arsenal’s pressure paid off in the 65th minute when Walcott chipped a cross towards Sanchez in the six-yard box and the Chilean buried his header into the corner of the net.

Astonishingly, Wenger’s team contrived to shoot themselves in the foot yet again just 59 seconds later.

Esteban Cambiasso clipped an astute pass over the Arsenal defence to the unmarked Pardo and he drilled a low cross to substitute Finnbogason, who eased in front of the flat-footed Mertesacker to flick his shot past Ospina from close-range.

Roberto produced a fine save to keep out Mesut Ozil’s free-kick and Sanchez headed narrowly wide, but it wasn’t long before Arsenal’s shell-shocked players were trudged off with the sound of jeers ringing in their ears.