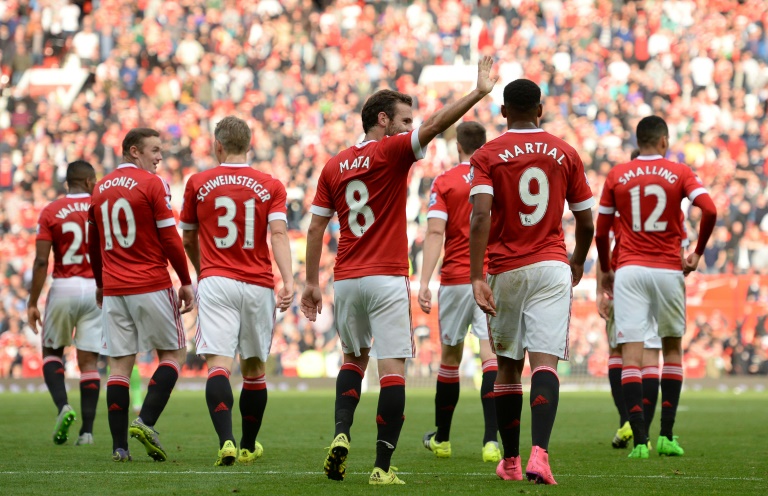 Back on top of the Premier League, Manchester United will attempt to get their Champions League campaign off the ground when they welcome Wolfsburg to Old Trafford on Wednesday.

Domestically, United made a slow start to the season, but the deadline-day arrival of Anthony Martial appears to have inspired Louis van Gaal’s side, who have recorded four consecutive three-goal victories against Liverpool, Southampton, Ipswich Town, in the League Cup, and Sunderland.

Saturday’s 3-0 win over Sunderland took United to the top of the league for the first time since 2013, but having begun the Champions League with a 2-1 defeat at PSV Eindhoven — a game marred by Luke Shaw’s gruesome double leg break — they are under increased pressure to win their first home game.

“I think in the Champions League you need to win all your home matches, otherwise it shall be very difficult,” says Van Gaal.

“We have improved when we have to compare with the team of last year, and we need still time to improve because we have to improve to win the Premier League or the Champions League.”

Martial, 19, has taken to life in English football more quickly than anyone could have anticipated, scoring four goals in his first five games, and his defence-stretching pace has also benefited the three players playing behind him.

Wayne Rooney and Memphis Depay scored their first league goals of the season against Sunderland — the former ending an 11-game drought — while Juan Mata has come into his own on the right flank, producing three goals and three assists in his last seven outings.

But Michael Carrick and Marcos Rojo will not face Wolfsburg due to injury, while Antonio Valencia and Ander Herrera are doubts.

It leaves Van Gaal facing a dilemma at full-back, with Matteo Darmian having switched from right-back to left-back against Sunderland and Valencia having filled in on the right side of the defence.

Despite United’s recent domestic flowering, they will be aware of the potential cost of failure against Wolfsburg.

The last time United failed to win either of their first two group games was in 2011-12, when a 1-1 draw at Benfica was followed by an untidy 3-3 draw at home to Basel. Two and a half months later, they were out.

Wolfsburg go into the game beneath a cloud of exhaust fumes emanating from the scandal surrounding longstanding benefactor Volkswagen, the German car giant, which has admitted that 11 million of its diesel cars have passed pollution tests using fraudulent means.

While sports director Klaus Allofs is adamant the scandal will have no effect on the club, it has coincided with a sudden downturn in the on-field fortunes of last season’s German Cup winners and Bundesliga runners-up.

Unbeaten in their first five league games, Wolfsburg found themselves playing the unwitting stooges to Robert Lewandowski’s record-breaking five-goal haul in a 5-1 win for Bayern Munich a week ago and then drew 1-1 at home to bottom club Hannover at the weekend.

Centre-back Dante has admitted the defeat at Bayern is “not something you get over quickly”.

Wolfsburg are slowly adapting to life without Kevin De Bruyne, Germany’s Footballer of the Year last season, and new signing Julian Draxler — signed to replace the Belgium international, who joined Chelsea — is still bedding in.

The Wolves are also nursing a number of injuries, with Robin Knoche, Vierinha and Koen Casteels all out and Luiz Gustavo a doubt after aggravating a knee problem during the mauling by Bayern.

But they hold the upper hand over United ahead of Wednesday’s encounter, having opened their Group B campaign with a 1-0 home win over CSKA Moscow.

“United are a top side,” forward Andre Schuerrle told German football magazine Kicker. “We are a bit in the underdog role and we’ll have to give our all. Then we have a chance.”