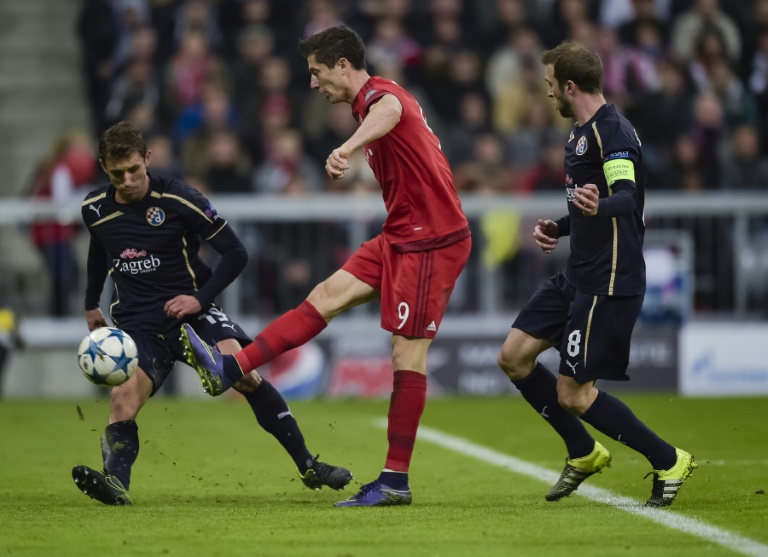 Arsenal and Chelsea had a Champion League night to forget on Tuesday as a Robert Lewandowski hat-trick helped Bayern Munich crush Dinamo Zagreb.

The Germans appeared to have the three points in the bag after Kyriakos Papadopoulos’s header before the break.

But Luis Suarez turned the game around in the final 10 minutes as Sergi Roberto tapped home the rebound after the Uruguayan’s initial effort had been saved.

With Roma sent on their way 3-2 by BATE Borisov it left Barca shading Group E.

Jose Mourinho’s return to Porto, the team who the Portuguese guided to the 2004 title, proved an unhappy affair.

Andre Andre’s opener for Porto late in the first half was quickly cancelled out by a superb Willian free-kick, but Maicon’s 52nd-minute header proved to be the difference in this Group G clash played at a rip-roaring pace.

Arguably the most stunning result of the evening emerged from the Emirates Stadium, where Greek champions Olympiakos shocked Arsenal 3-2 to leave the Gunners stone last in Group F.

The Greeks, ending a 12-match losing run in England, left Arsenal and their coach Arsene Wenger ashen-faced, and the team’s fans jeering at the final whistle.

After falling behind to Felipe Pardo’s deflected opener, Arsenal equalised through Theo Walcott.

But then a horrendous mistake from goalkeeper David Ospina, selected over regular first choice Petr Cech, allowed a Kostas Fortounis corner to slip through his grasp for an embarrassing own goal.

Alexis Sanchez dragged Arsenal back into it with a second half equaliser, but incredibly the north Londoners imploded again with more slack defending gifting Iceland striker Alfred Finnbogason the winner.

Beaten in the group curtain raiser in Zagreb Arsenal are now up against it to extricate themselves from the pool stages.

To compound their plight free-shooting Bayern Munich await, the German giants flexing their muscles in Zagreb.

Bayern top the table, Pep Guardiola’s side cruising towards the knockout stage after Lewandowski’s treble, and goals from Douglas Costa and Mario Goetze steamrollered Dinamo Zagreb 5-0.

“We played in a very concentrated fashion from the start and when you take your goal chances, the game was over after 30 minutes,” said Bayern captain Philipp Lahm.

“He’s had an unbelievable week behind him,” admitted Lahm.

Wednesday’s menu features the two Manchester clubs, United and City, against Vfl Wolfsburg and Borussia Moenchengladbach, while Real Madrid are in Malmo and Paris Saint-Germain have a tricky assignment away to Shakhtar Donetsk.