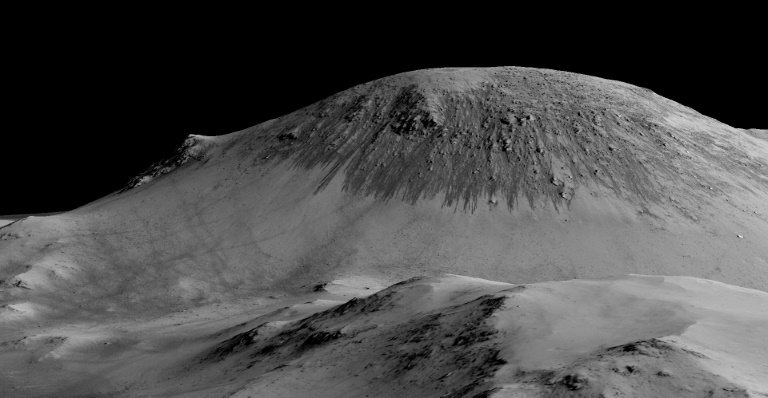 Scientists announced Monday “the strongest evidence yet” of liquid water on Mars, raising the distant prospect of microscopic life on our neighbouring planet.

Curious lines running down steep slopes on the surface of the Red Planet may be streaks of super-salty brine, a team said.

Evidence of “hydrated” salt minerals in the streaks “strongly support the hypothesis” of liquid water on Mars — though not H2O as we know it, concluded a research paper in the journal Nature Geoscience.

If anything, it was likely “wet soil, not free water sitting on the surface,” study co-author Alfred McEwen from the University of Arizona, told AFP.

NASA said the findings, made with its Mars Reconnaissance Orbiter, “provide the strongest evidence yet that liquid water flows intermittently on present-day Mars.”

“Mars is not the dry, arid planet we thought of in the past,” Jim Green, the American agency’s planetary science director told journalists in Washington.

The presence of hydrated salt minerals in the lines, indicates that “water plays a vital role in the formation of these streaks,” according to Lujendra Ojha of the Georgia Institute of Technology in Atlanta, who co-authored the study.

The minerals, called perchlorates, contain water molecules in their make-up.

It is widely accepted that the Red Planet once hosted plentiful water in liquid form, and still has water today, albeit frozen in ice underground.

Earlier this year, NASA said almost half of Mars’ northern hemisphere had once been an ocean, reaching depths greater than 1.6 kilometres (one mile).

Astrobiologist Lewis Dartnell of the University of Leicester Space Research Centre said the study, which he did not take part in, presented “very strong evidence that what we believe to be signs of liquid water trickling down the Martian surface is in fact that.”

This, in turn, raised the intriguing prospect of life, he told AFP.

“If there is liquid water trickling beneath the surface, maybe that’s an environment where bacteria and microbial life can survive… The results we’ve had this afternoon are very exciting because they increase the possibility that there is life alive on Mars today.”

Others said it was early days yet.

“Rather, they’ve spotted the kind of hydrated minerals that could make water briny enough to enable it to flow as a liquid at the extremely low, sub-zero temperatures on Mars. That makes the hypothesis that liquid water is involved in making those stains quite plausible, but isn’t really a direct detection.”

And even if briny water does exist: “whether or not that substantially improves the chances of us finding life on Mars… the jury is definitely still out on that,” McCaughrean added.

Scientists have long hypothesised that the seasonal streaks dubbed “recurring slope lineae” (RSL), may be formed by brine flows.

But spacecraft images have been unable to reveal detail of what exactly is in the lines — the pixel resolution is coarser than the width of the streaks themselves.

Up to a few hundred metres in length and typically under five metres (16 feet) wide, they appear on slopes during warm seasons, lengthen, then fade as they cool.

For the new study, a team from the United States and France devised a method to extract more data from individual pixels in images from the CRISM spectrometer on NASA’s Orbiter, and detected evidence of hydrated salt minerals in the streaks.

“Today we’re revolutionising our understanding of this planet,” said Green. “Our rovers are finding there’s a lot more humidity in the air” and the soil is moister than anticipated.

Added Michael Meyer, lead scientist for NASA’s Mars exploration programme: “It seems that the more we study Mars, the more we learn how life could be supported and where there are resources to support life in the future.”

This was not the first time perchlorates were found on Mars.

In April this year, a different team wrote in the same journal that perchlorate salts were “widespread” on the surface of our neighbouring planet, and humidity and temperature conditions were just right for salty brines to exist.

Perchlorates are highly absorbent and lower the freezing point of water so that it remains liquid at colder temperatures.

Asked if the data was the final proof of liquid water on Mars, McEwen replied: “I would say almost.”