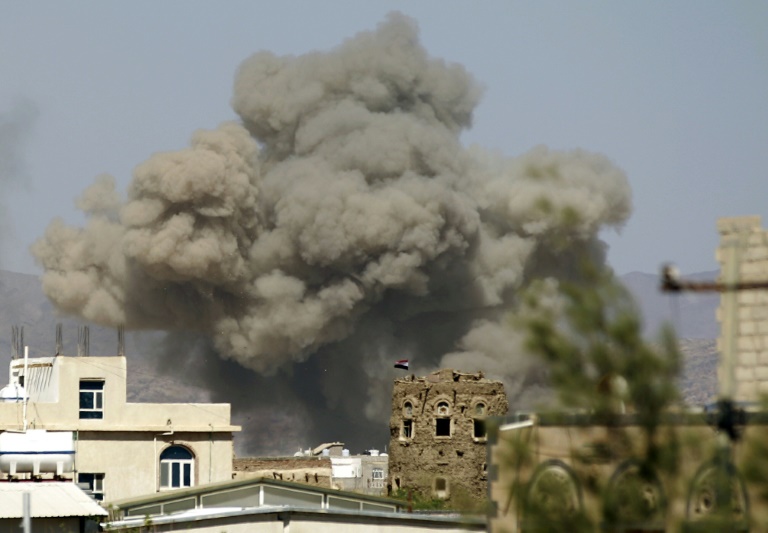 The Saudi-led anti-rebel coalition denied on Tuesday that its warplanes were behind the bombing of a wedding in southwestern Yemen as the toll soared to 131, including women and children.

Residents said the Arab coalition, which launched an air war on the Huthi Shiite rebels in late March, was behind the attack on the wedding in Wahijah village near the Red Sea city of Mokha.

But the spokesman for the Riyadh-based coalition, Brigadier General Ahmed al-Assiri, denied any involvement.

“The coalition did not conduct any air strikes in the area over the past three days,” he said. “This is completely false.”

The coalition called for an independent investigation into the incident.

“We can prove by satellite that we did not fly over that zone,” a coalition source said.

The death toll rose to 131 on Tuesday after “more bodies were taken overnight to hospital and many of the wounded succumbed to their injuries,” a local health official told AFP, requesting anonymity.

Previously the toll had been at least 40 dead and dozens wounded.

A doctor at Mokha’s Al-Reefi Hospital, Mayaz al-Hamadi, confirmed that 131 bodies, including women and children, had been brought in.

“Many bodies are laid on the floor because the hospital does not have the means” to accommodate the large number of fatalities, he said.

The United Nations said it was trying to verify the death toll.

“If the numbers are as high as suggested, this may be the single deadliest incident since the start of the conflict,” Rupert Colville, spokesman for the UN High Commissioner for Human Rights, told reporters in Geneva.

Colville said that more civilians were being killed in the fighting in Yemen amid “an increasing number of air strikes targeting bridges and highways”.

According to new UN figures, 151 civilians were killed, including 26 children and 10 women, in the conflict between September 11 and 24.

A total of 2,355 civilians have been killed in the war since late March, and 4,862 have been wounded, Colville said.

Ban urged all rival sides in Yemen “to immediately cease all military activities and resolve all differences through peaceful negotiations”.

On Sunday, as he left for the UN General Assembly, Hadi urged the rebels to lay down their arms and resume dialogue to end the conflict.

Human rights watchdogs have repeatedly criticised the coalition’s aerial bombardment of Yemen, saying they have struck areas without any military targets.

They have also accused the rebels of war crimes for what they have called “indiscriminate” shelling of civilian-populated areas.

In late August, an air raid struck a bottled-water factory in the northern province of Hajja, killing 17 civilians and 14 rebels.

Warplanes in July attacked the residences of employees of a power plant in Mokha, killing 65 civilians, while a raid on a dairy plant in the Red Sea port city of Hodeida in April left 35 civilians dead.